The nursing home I work in has pets.  Over the Easter holidays, one of our birds got sick and needed antibiotics twice a day for two weeks.  I do much of the bird care (as I’m one of the few that is not actually freaked out by them flapping around) so it fell to me to administer this medication.  Giving the meds is a hellish procedure for both the bird and I.  I had to catch her first in a little towel.  She is basically wild so that is the challenge.  Then I had to flip her on her back squirt the meds into her little beak and get her back into her cage.  Sometimes, she’d escape and I’d have to chase her around for a while.  I decided to bring the birds home for a week rather than have to go to work twice a day on my days off. 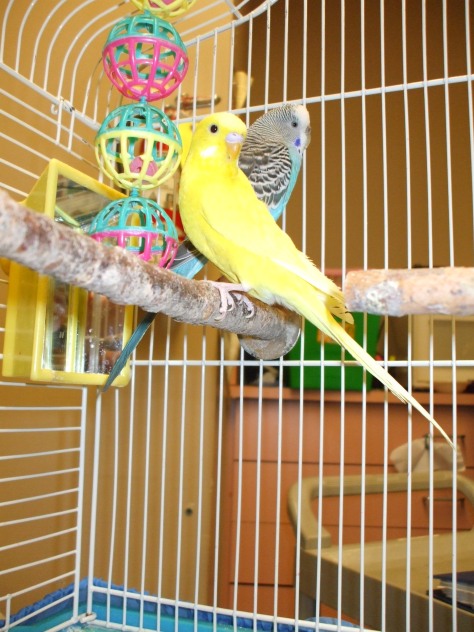 Then 6 days later, the cat needed surgery and he needed to be monitored for two weeks by one person.  He needed to be monitored because some of his meds are adjusted based on how he is eating and using his litter box.  With three shifts in the home there wouldn’t be one person watching out for him and mistakes could happen.  So off to Wanda’s rehab unit!  He is doing pretty good now.  And making himself at home! 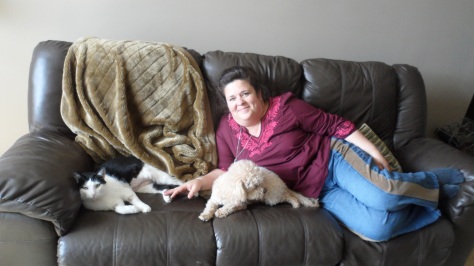 Here is my mad plan….Try and get some sewing done and get some photos of “cat vs sewing”!  I’m the only historical sewist that I know of that doesn’t have a cat that lays down on available fabric!

The dress came from Eaton’s. 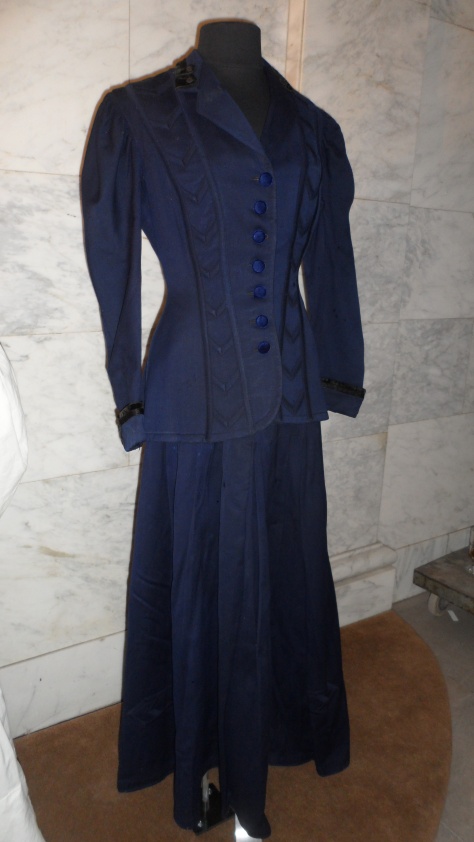 I bet there was a very smart hat that went with this! 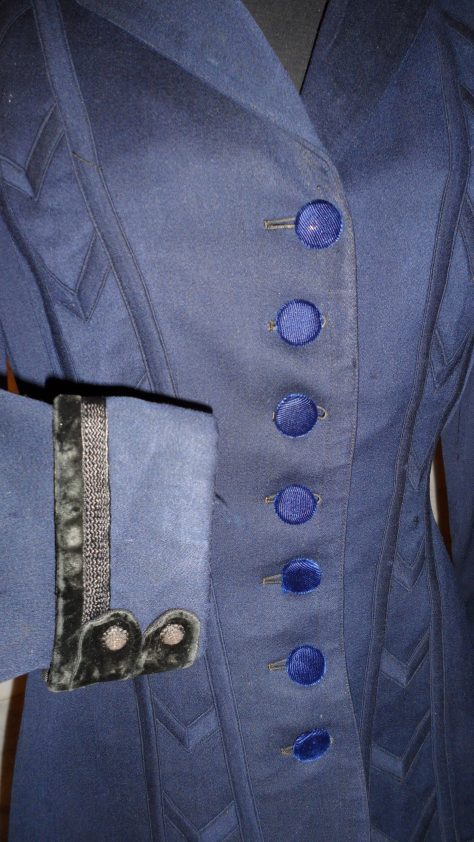 The buttons are velvet covered.  I imagine they originally matched the color of the dress more exactly.  There was black trim on the sleeves and the collar and that was also velvet. 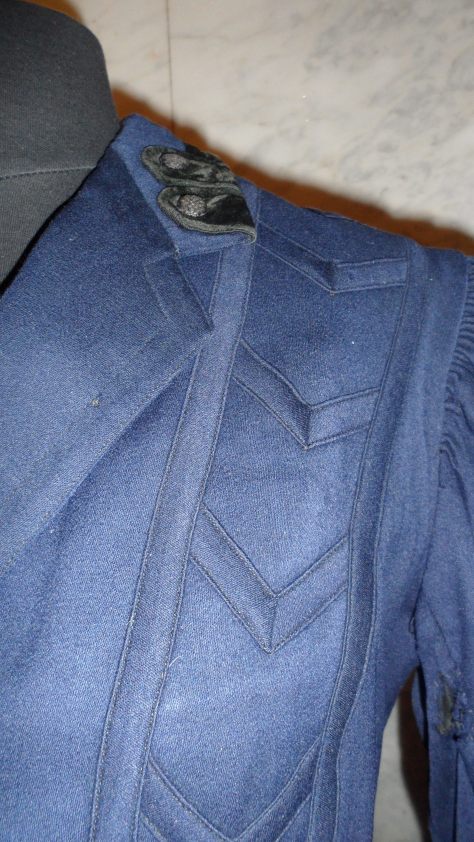 I love the chevron detail on the jacket.  This was carried out on the lower edge of the skirt (which did not show up at all in the photos.)  The pattern also goes across the back of the jacket. 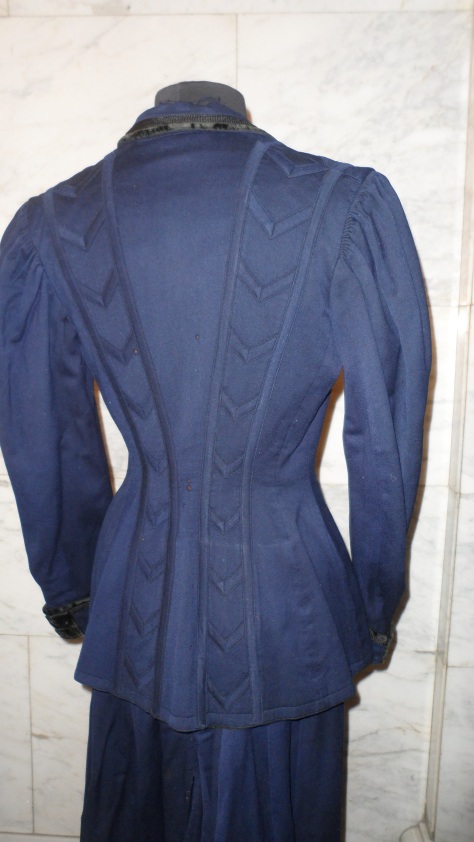 That is a smart suit.  It wouldn’t take to many changes to make it nice for modern wear.  (Larger waist, pencil skirt or slacks, chunky necklace….)  It was a real treat to see.  It was also cool to see that this bride was MUCH taller than our 1830s bride!

On June 6 of last year, I posted about an 1830s wedding dress that is being stored in the Canadian Costume Museum. 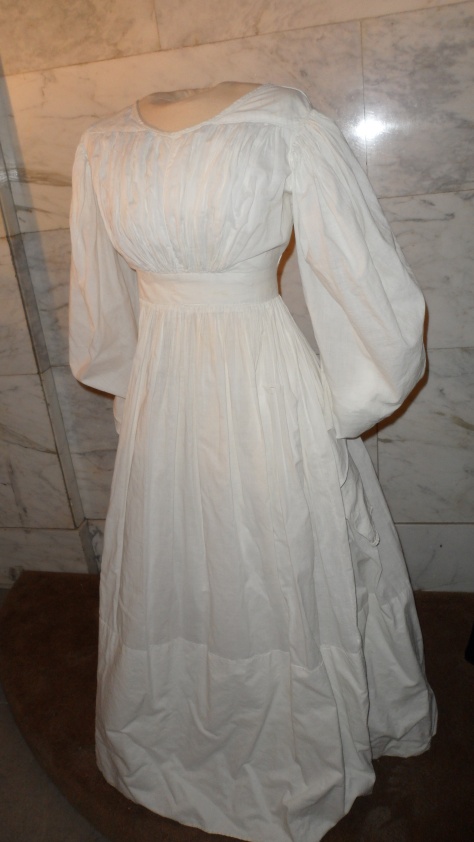 In response to the post, I was contacted by a family member of the original owner who wanted to see the dress in person.   Last Saturday, we were able to arrange for the family (about 8 of them) to see the dress.  They took photos of themselves with the dress and swapped some information with us. 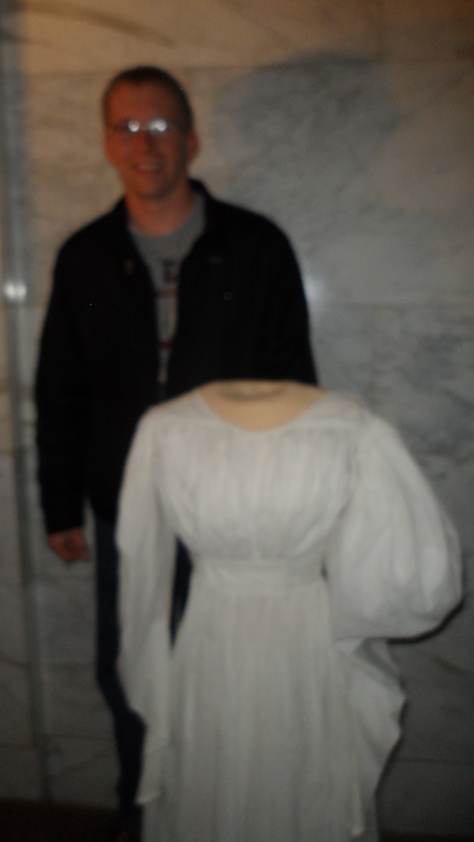 Unfortunately, the photo of Ray (the family member who contacted me) with the dress is blurry.  To bad!  The funny thing was seeing how much taller Ray was than his great-grandma!  We had the hem of the dress near where it would have been when worn and Ray was standing at the same level!

The family shared a photo of great-grandma taken a few decades later than the dress was originally worn.  I would guess this was done in the 1860s. 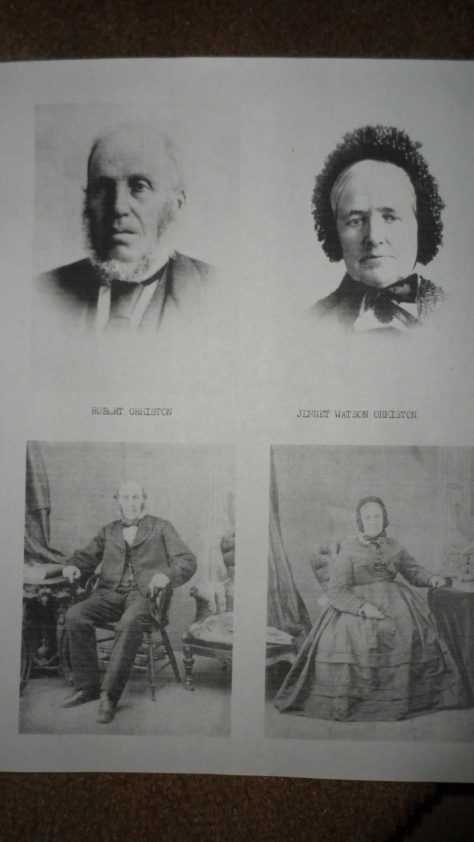 It was a bit of a buzz to allow the family the contact with the dress and I felt pleased that my ramblings here helped facilitate that!

I had a full day on Saturday.  It proved to be full of material worthy of a post.  I don’t know which item to start with!  Let me see….hmmmm.  How about this one.

I went to the Canadian Costume Museum and one of my goals was to find a dress that I only had the chance to peek at previously but REALLY wanted to check out in detail.  And I was able to find it!  It is so delicious!  It is a taffeta wedding gown from 1871-73. 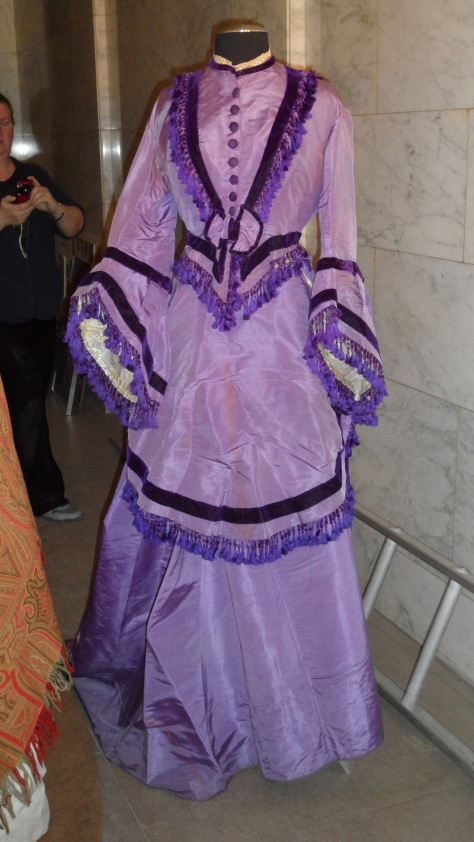 The color is so wonderful!  Lilac…just like my favorite flowers. The darker trim is velvet.  The tassels have a fuzzy strand between themselves and the edge they are attached to. 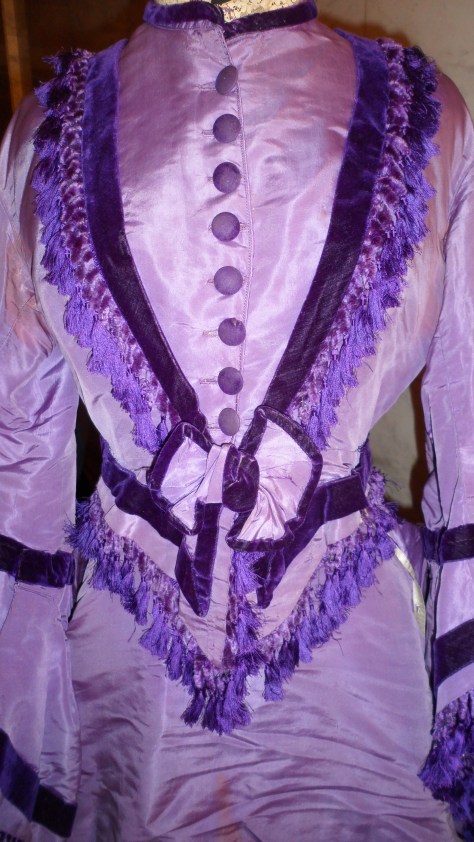 Look at the inside of the sleeve!  Little pleated ruffles in white and a wide (3-4 inches) lace inner sleeve. 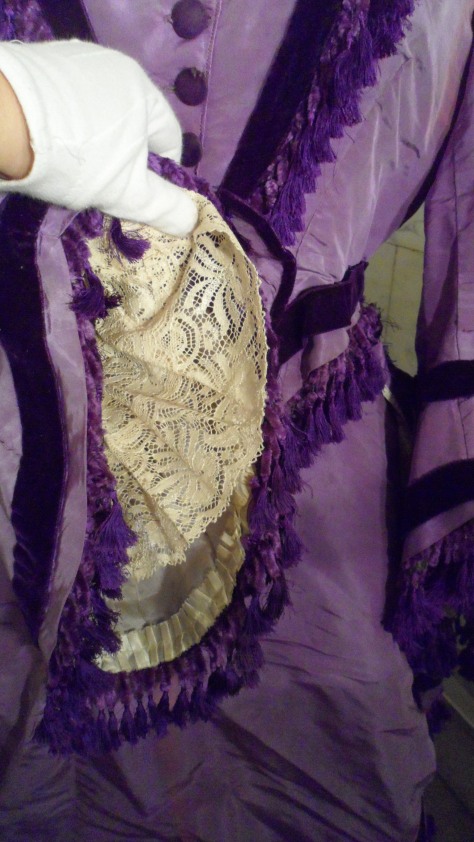 Here is the side view.  I wish I had a bustle to show it to its best advantage.  The over skirt has the velvet and tassel detail with a bow added. 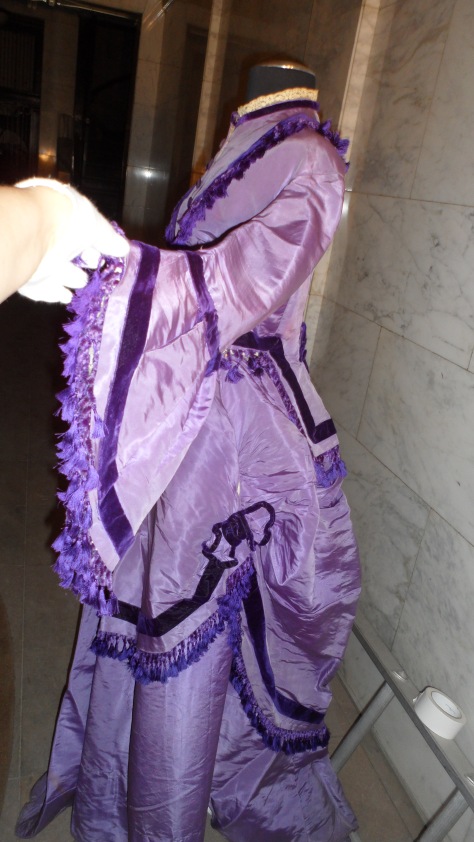 The back view shows off the train. 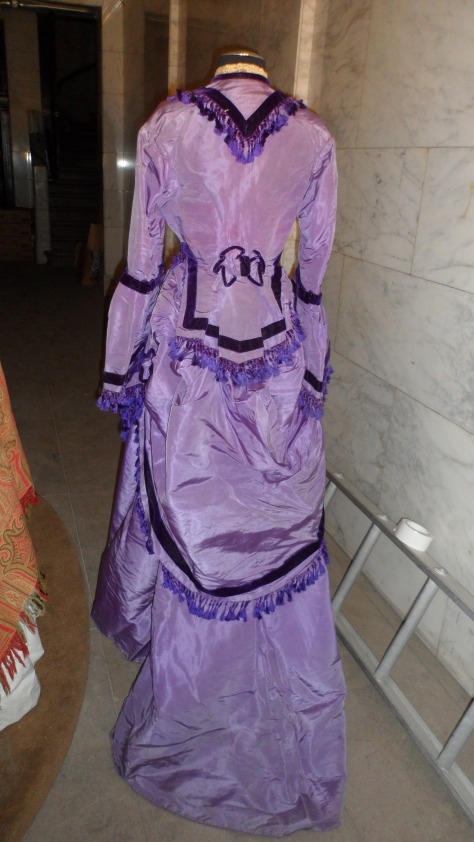 The back of the bodice has the same trim carried through. 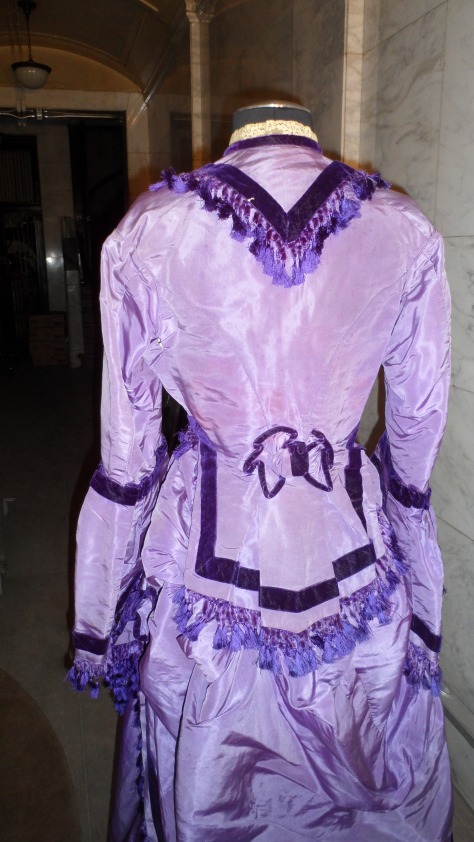 The bow matches the bow on the over skirt. 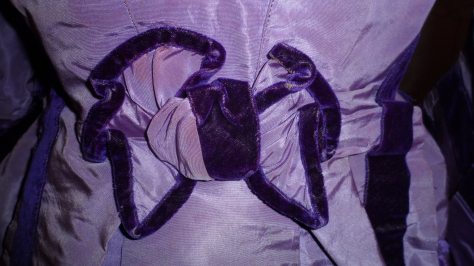 I like how the taffeta and velvet are blended together…especially at the knot.  I like this dress.  I’d really love to copy it exactly!

One of the last antique photos I posted about, was a tin type in a paper envelope.  I have another photo in a paper envelope I want to show you  today.  But, this one is odd…it isn’t a tin type.  It is a paper photo.  I’m guessing it is some sort of transition photo between the tin type and the carte de visit.  I’d guess it is from the 1870s.  But, I can’t find solid info to back up my theory. 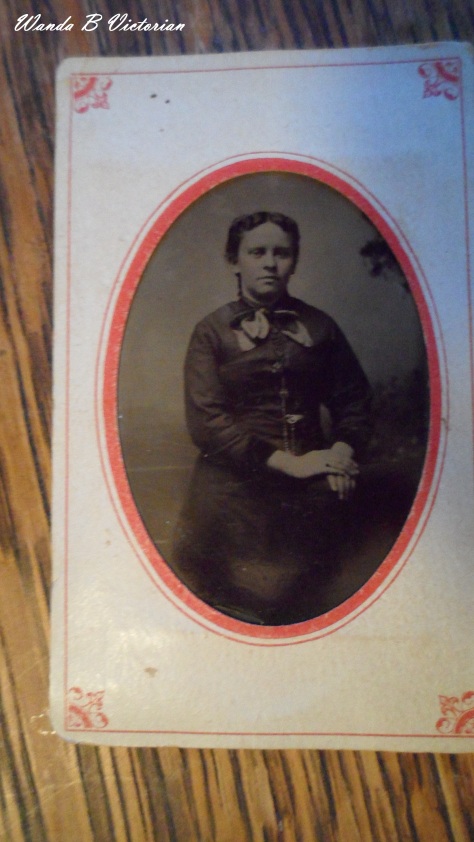 She appears to be about 15 years old.  She has a ribbon at her neck, a watch chain and possibly a ring.  What I love about this photo is her hair is just a bit messy and you can faintly see her bodice is tucked into the top of her corset.  I wonder how her life turned out…. 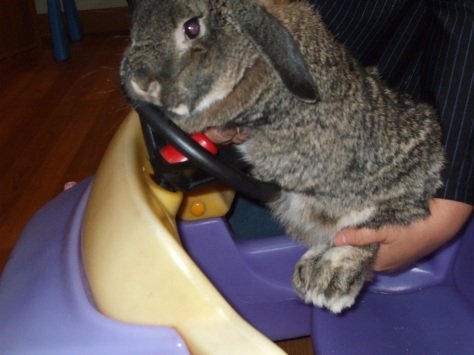 This is our pet rabbit at work.  His name is Pepsi.  In order to raise funds to support the pets we have at work, my team and I are having a Pepsi drive….  We are selling Pepsi and other pops today during the staff coffee break times.

We put Pepsi in a toy car so we could get photos of him driving. 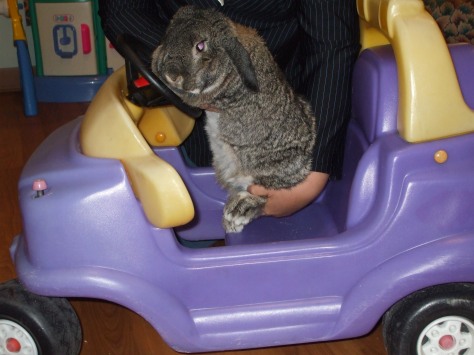 Isn’t this cuteness itself?  He is a good bunny and he puts up with lots of lovin’. 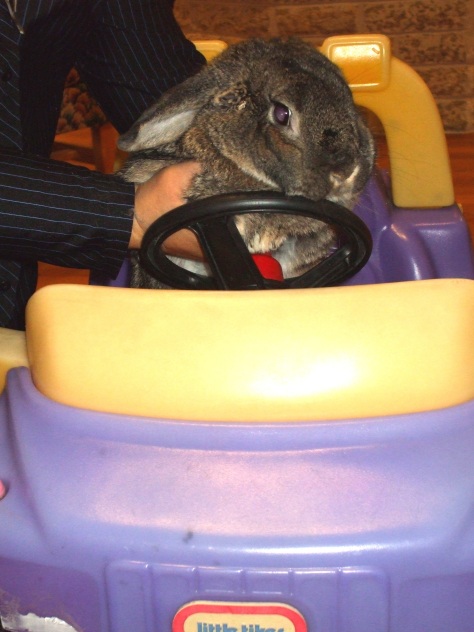 Hopefully, we aren’t driving him crazy!

I’ve been sick all weekend.  But, I have managed to keep moving.  I have found small projects I could work on without expending a lot of energy.  I don’t know about you folks but I find wrangling huge skirt gores a demanding and physical job-I actually sweat doing that work.  The skirt was out of the question for this weekend.

My hat was at a stage that it needed simple seams machine sewn or hand sewing (when you are flaked out in a recliner, hand sewing isn’t that bad…) The bag for my 1840s costume falls under that category as well. 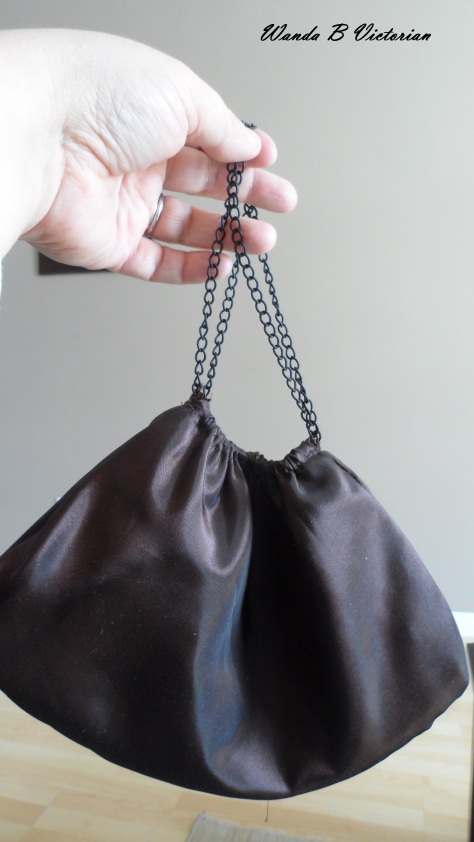 I decided to keep it simple as there will be a lot going on with that dress.  The silly story that goes with this bag is that it originally wasn’t going to be a bag.  It was going to be the fabric covering my hat brim.  After I cut the brim out, I realized that the pattern piece had actually torn and the two fabric pieces were too short to cover the hat.  I had to recut them.  But, that used up all my remaining material so I had to use the rejected pieces for the bag…hence the slightly elongated shape.  Ah, such is life.  At least my fans should fit in there.  The chain is left over from a package I had bought that also had a gold chain in it.  The gold chain was used to fix my broken pocket watch chain.  So the bag qualifies as being completely de stashing…yeah me!