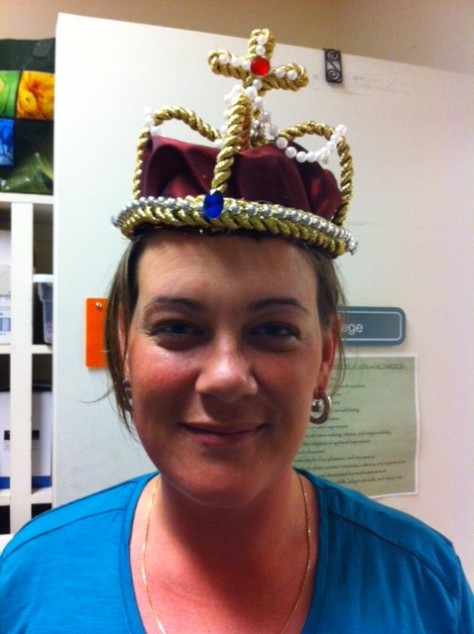 Modeled by my awesome co-worker!

I got the crowns I made for work to work and I finished them off.

I’m lovin’ how it looks!

This past weekend I got in a bit of shopping.  I wasn’t gonna do it, I swear!  But, I was right next door at the chiropractor’s office and I was a bit dizzy after he fixed my neck-to dizzy to drive and, well there was a sale on….

The fringe and the wide lace were bought for this project.

Then I met some old friends for tea.  We hadn’t seen each other for a couple of years and hooked up again because of Facebook.  Because of Facebook, they found out about my odd little hobby and thought I might like some things from their Great Aunt H…some of which came from her mother!  Ah…YEAH!

I don’t know how old this stuff is but they thought 100 years anyway…so Edwardian at least. I think that since I’m okay with using 2014 made buttons on Victorian costumes, I can probably be okay with a 1900 and something one eh?

A belt buckle with all the working bits still intact and some buttons that would go well with it. 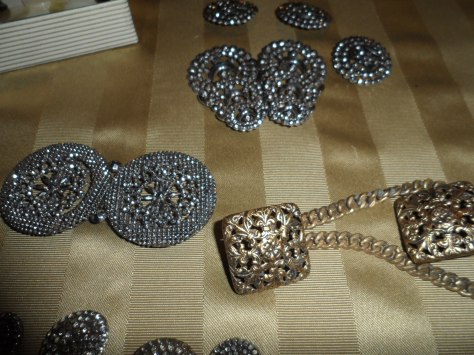 There is another round and functional cut steel belt buckle on the left and the gold item is a cloak fastener.

That cloak fastener is screaming for a red wool cloak to hold shut.  It is clever in its simplicity.  Two buttons, one with a chain welded on to it.  You sew the buttons on the cloak, one to each side and use the chain as a button-hole.  Ta da!

What is that underneath those steel buttons?

Cute buttons with horseless carriages on them!  I may have to make an Edwardian Duster…

Some brass buttons to inspire me are here as well!

They have a horn and the English crown on them.

The perfect handkerchief for my next costume! So dainty! So pretty! Pretty old!

And now I have a choice to make…The wide lace I bought in the morning…or the wide lace given to me in the evening…. 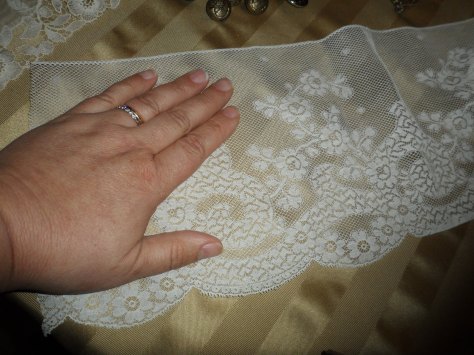 I’m thinking the given lace is the better match.  But it means I have to cut it in half.  Can I do it?  I’ll have to tell myself that lace is meant to make something lacy.  I’d only be fulfilling its destiny by cutting it and using it rather than stuffing it in another box…. It is probably only vintage and not truly antique…yet.

Next month, at work, we are planning a party for our seniors with a Royal Theme.  At one point in the party, we will be crowning a king and queen and I volunteered to use up some of my stash and make the props for that. (Ok, Ok, you caught me.  It wasn’t all stash.  I did buy some cording-on sale-but I couldn’t help myself…it was perfect and going to save me a ton of work.)

I made two capes from some red velvet and fake fur.

This one had a white tightly curled fake fur. I believe it is supposed to look like white Astrakhan (lambs wool). 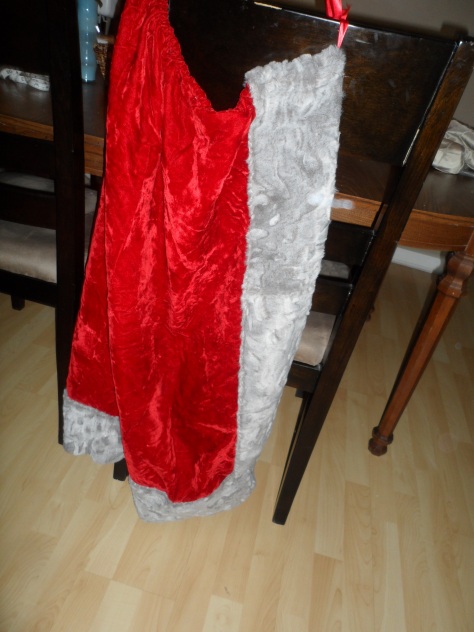 This one was made with a silky pale grey fur.

I made two crowns from wired cording and scraps of red polyester.

I’ll take them to work and find some jewels in our craft stash to 1) fancy it up and 2) hide all the joins and hot glue.

I have the silly crown on backwards.  That is why there is a funky seam and the cross is hidden.  That is twice in one week I’ve put a hat on backwards and been completely oblivious.  (Shakes head sadly…)

This year, while at the Fort, Shirley and I spent a lot of our time inspecting the outfits worn by the staff.  The focus was, of course, stealing ideas for ourselves!

This girl was dressed as the wife of one of the men living in the big house.  I forgot what she said his job was. It was a cooler day so she was dressed in a heavier fabric (wool likely).  My dress was  designed in a late 50’s style and hers was late 40’s early 50’s.  (Looks like this pattern) The fort was built early 50’s but was extremely “backwoods” so the ladies would not be in on the latest fashions.

On her head, the girl was wearing a woolen cap that I think I can copy…I really need to get some caps made for these earlier years.  Many ladies would wear them under their bonnets-especially older ladies such as myself!

It is basically 3 pieces knit on larger needles and the color bits knit in a wave on smaller needles. I’d do this but not in Christmas colors. 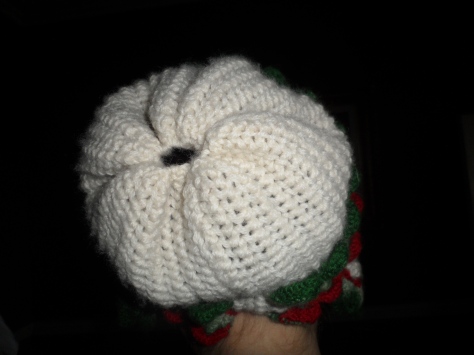 The back is just a basic hat.

I can do this.

And here is a couple of lace ones. 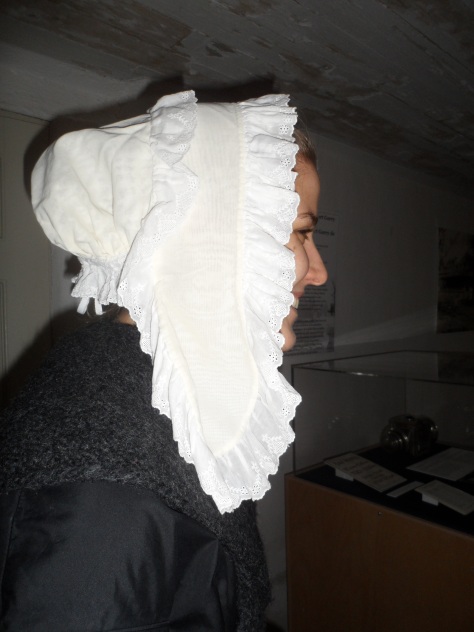 And I must have this cape.  How cute is this!  I wonder if I can figure it out without a pattern?

Here is the back view. 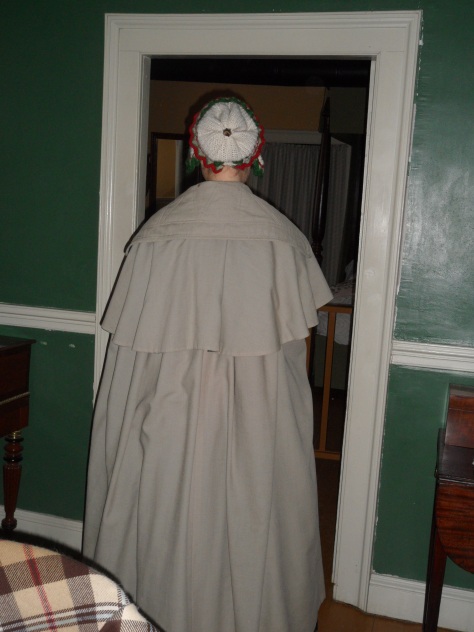 Of course it is lined.

Then there is this red one…Little Red Riding Hood… 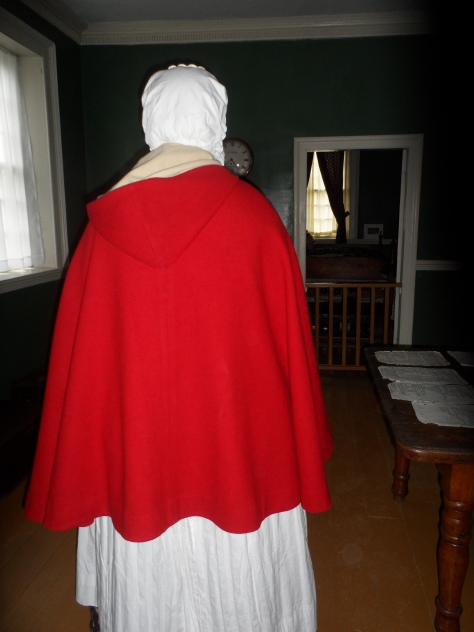 I think I have some red wool that was given to me that might be big enough.

Being connected to the Hudson Bay Company the Fort had many samples of cloaks made from their blankets.  I should make one of these, as a Manitoban…

Several of the ladies were wearing sontags.  Not a one of them knew that that was its name. They called it a criss-cross shawl.  I can’t blame them for that.  They are all students (most weren’t even history students) that got summer jobs from the government.  (I want their jobs….)  They are given basic info that they memorize…and then pray they don’t run into someone who thinks they know more than they do (insert winky face here.)

When you go to the Old Fort in costume, they will often let you get up nice and close to some of the artifacts.  Here are some lovely things that I wish were mine ALL MINE muhahahaha.  Okay, the crazy side slipped out for a second.  I know these things belong in a museum for all to see and enjoy.

A pretty pink bonnet. I was told that a bonnet on the bed was good luck but a top hat was bad. I can’t find anything reliable to verify that.

This whole desk is lovely to me. I love old wood furniture. 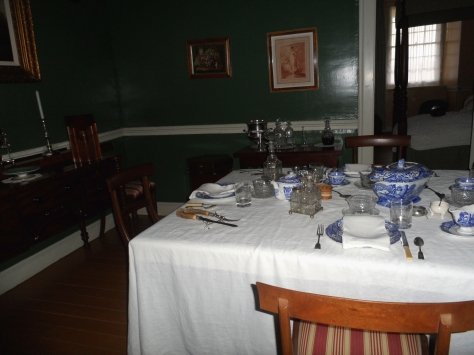 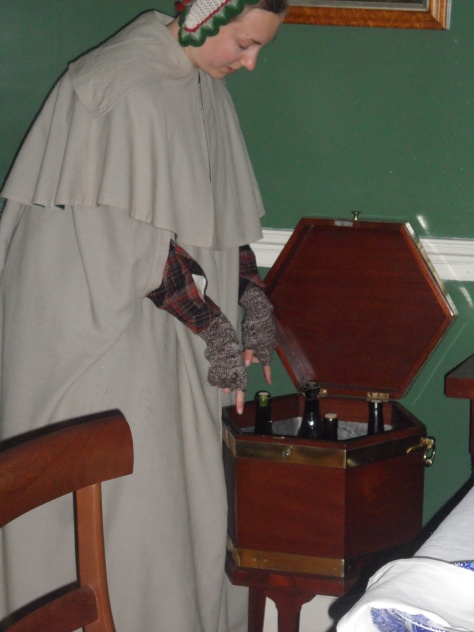 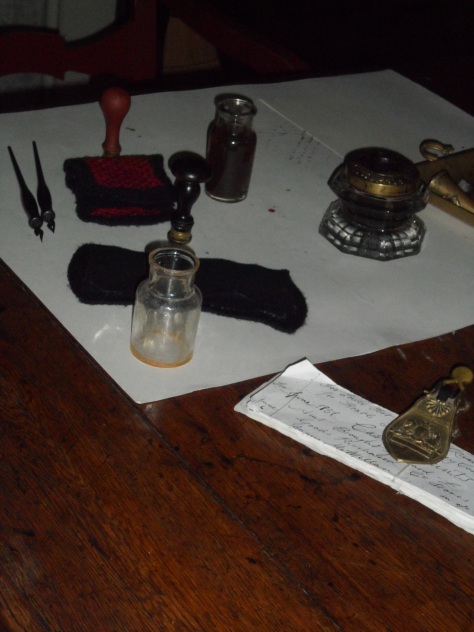 Wouldn’t this trunk look lovely in my living room?

And this eyelet is to die for , is it not?

My next post will feature some of the clothing of the folks working in the museum.  My mind is whirling with some future projects!

Shirley and I were a pair of brave troopers and headed out to our Victoria Day event in spite of the near torrential rain. Here are some of my favorite photos.

Unlike last year, we spent quite a bit of time in the basement checking out the kitchens. 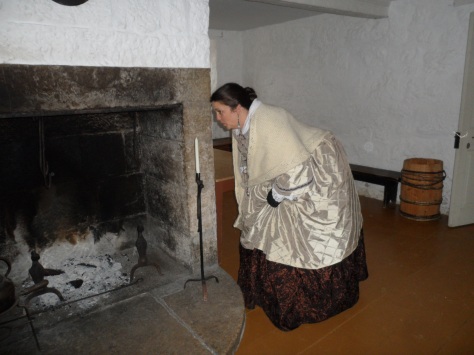 We did a few lady like “at work” poses. 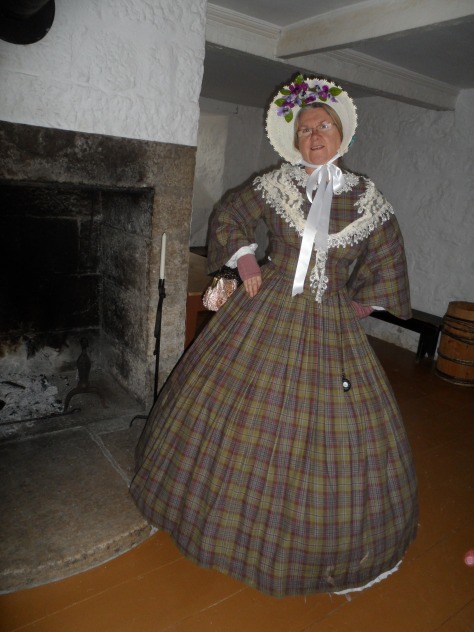 Then we got a bit silly. Shirley wanted to flaunt her lovely Victorian shape.

And I wanted to show of my thrift store find of “sensible shoes”.

We then decided to brave the rain (which had slowed down) for some outdoor shots.

We walked out of the Fort walls to some of the outer building. 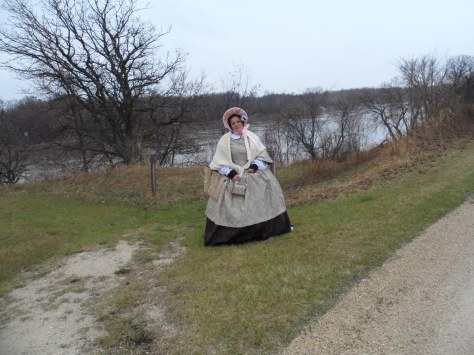 The river gave us some interesting, if gloomy, back grounds.  As you can tell by my expression, I’m feeling bedraggled because of the rain and because my skirt was too long and I kept stepping on it and dragging it through the dirt!

Shirley is managing to look dainty and fine! 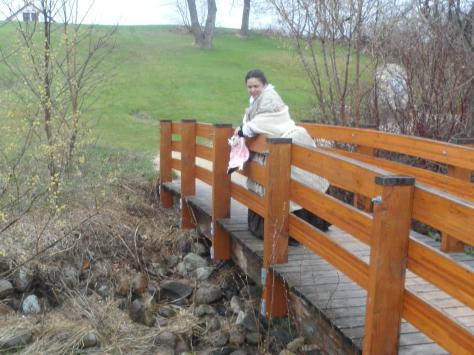 I wanted a photo like this…I liked last years so much.

I made Shirley do the same pose. Once the photo was done Shirley looked at me and found that I had put my hat back on…backwards! I wish I could say I planned it that way!

If the weather holds I’m going to be celebrating the Queen’s birthday at a tea held in her honor at the old Fort.  Keep your fingers crossed!

That is what I did all day.  My next project is all cut out now.  Time to get to the fun part!  The sewing.  Might not happen today as I have family obligations but tomorrow is a holiday! While I sew, I will have to come up with a name for it…

I saw this painting on the internet and I started drooling instantly over this dress! 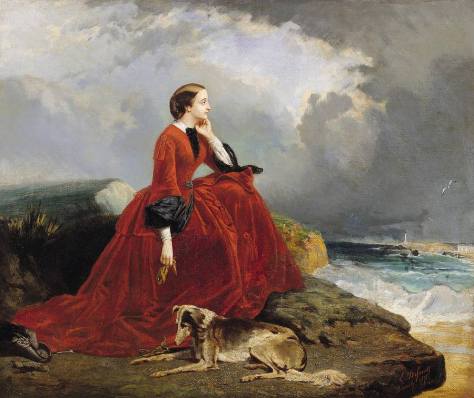 If you know me, you know I’m not obsessed with shopping.  I used to be when I was younger…got myself into some debt because of it and I’ve since grown up and learned my lesson.  Don’t get me wrong!  I don’t go without.  I treat myself too.  I just think before I do it.  I save for big-ticket items.  I buy fakes if they are cheaper and reasonably convincing.  I buy used rather than new.  And I think about it before I dive in.  But, I did dive in pretty deep this weekend.

I needed some fabric for my next project.  And there was no suitable material in my stash.  So off to my fabric store I went.  But, I bought fake silk…not real.  It was $45 a meter cheaper! 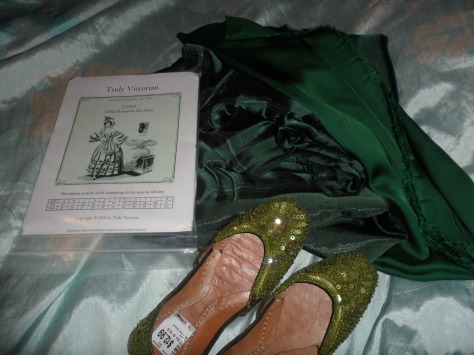 And crafty me…I talked my family into paying for that fabric by suggesting they donate money to the credit card rather than buying me a Mother’s Day gift.  Pretty fab gift I must say!

Then on Mother’s Day, my favorite thrift store was having a 50% off sale.  Woot Woot!  Off I go.  I snagged a pair of shoes that will go perfectly with my new costume.  I think they are from India.  The innards are real leather.  There doesn’t seem to be a right or a left-just like the early Victorian times.  The bling is a bit much but when you see where I’m going with this costume, you will forgive me.  And they cost $6.50.  How sweet is that!

I also got another pair of boots that will be great for early Victorian as well.  And they are a lot more sensible (read:lower heel) than my other boots.

If you look close they miss the mark, but from far away, they are believable.  I forgot how much I paid for these. May be $10?

Finally, I bought a little pin that I will be adding to my costume when it is done. 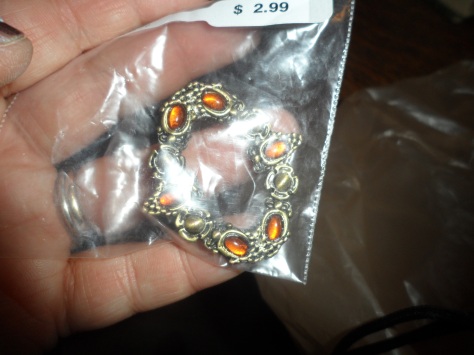 That was full price… a whopping $3.  All in all, I am pleased with my haul.

Now all I need is some free time to start my project.  I think I will take the pattern to work and read the instructions and cut out the pieces during my lunch break.

Wanda B Victorian
Create a free website or blog at WordPress.com.