The Costume Museum of Canada, where I volunteer, has been sorting through boxes of hundreds of shoes.  Some times random things-non shoe things-end up in the boxes and I have the fun of finding them.  In one pair of man’s button boots I found this.

Cool.  I had seen them in photographs and from a distance in museums.  I’ve seen replicas up close.  This is the first one I have ever held in my hot little gloved hands!  Well those button boots happened to be unbuttoned and so for the sake of preservation of those shoes I buttoned them with the hook.  Had a blast.  Learned the hard way it is best to button from the bottom up and not top down.  I can be a hands on learner for sure!

Later on, I found two lumps wrapped in tissue that were not shoe shaped.  I thought they were books. 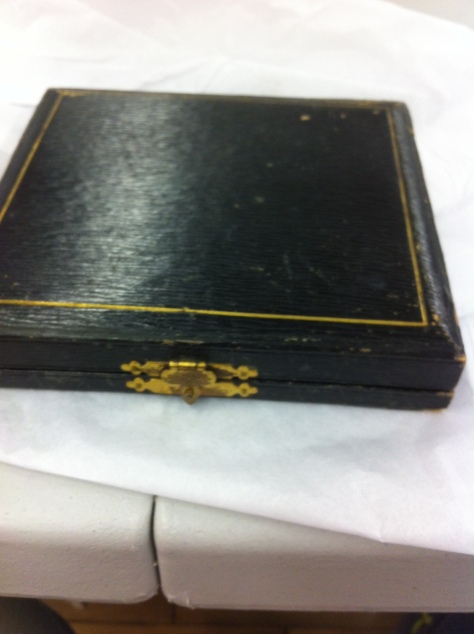 They turned out to be cases. Both looked like this one.

3 packets of needles. 2 bodkins. 2 button hooks…one long and one short. 1 crochet hook and 1 tapestry needle. A few items seemed to be missing from this “sewing kit”.

If I were to guess, I’d think that scissors would be missing.  The second case seemed to be missing several items as well. 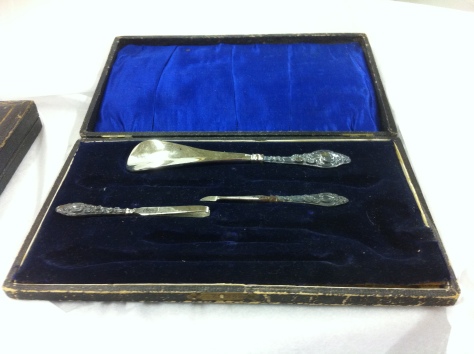 This one had a shoe horn, tweezers and a cuticle cutter. Would this be a grooming kit for a man?

It seems to be missing a pair of scissors, a button hook and 3 other items.