In my last post I wrote about tuning up my spinning wheel.  Since then, I have attempted to make it do its thing!  I used the wool I was given for Christmas.

At first it didn’t go to well.  It kept breaking.  After an hour and a half-this is all I accomplished.

This pile of broken tangled bits on the floor was greater than the finished bit on the wheel.

But, then suddenly it started to click and in 20 minutes, I doubled my production.

It is much thicker (and lumpier) than I hoped-especially if I ply it together to a 2 or three ply skein.  It would be stronger if I do but it will lose its distinct color changes so I might not do that.  There is a style of plying called Navajo (several videos on YouTube explaining how) that might not mess up the variegation as much.

The tricky part that I have to figure out….now I’m getting ahead of myself.  I need to concentrate on getting the one ply done before I figure out what I’m going to do next with it!  I do need more bobbins though…off to eBay….

I spent my Christmas Sunday tuning up my spinning wheel.

I got it cleaned up.

Re-glued some of the joints. I had to rig up a clamping system because none of my clamps were long enough.

I put a drop of sewing machine oil on the moving parts.

Tomorrow, I try spinning this! 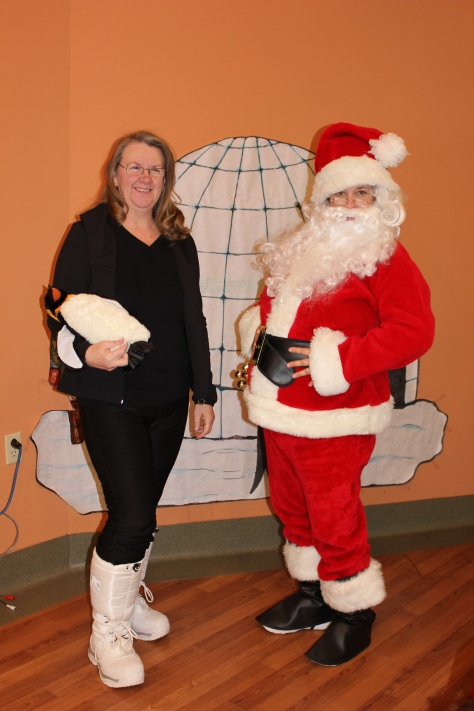 I don’t know how many of my readers actually care for a recap but I find them motivating.  One tends to forget how much gets made in a year and one wonders where the motivation will come for next year.  Seeing it all in one place gives me a feel good moment and a push to strive for next year.  So here it is… 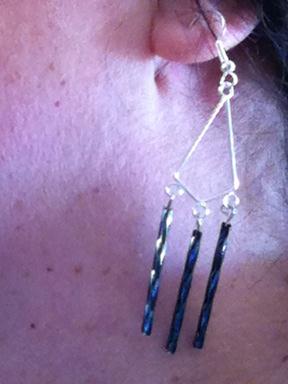 Added some frills to an already existing bustle. 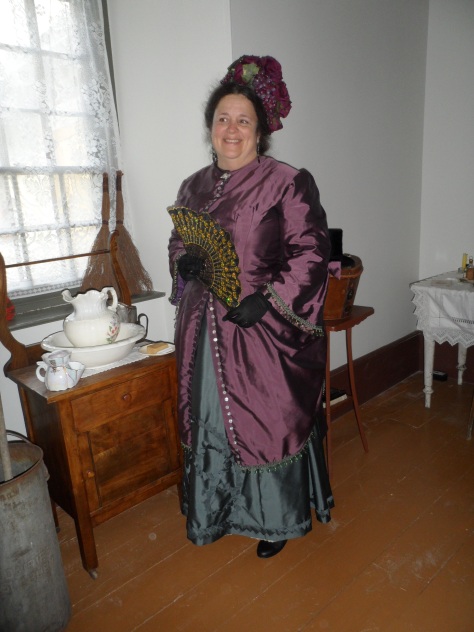 Added trim to the bottom of this skirt. 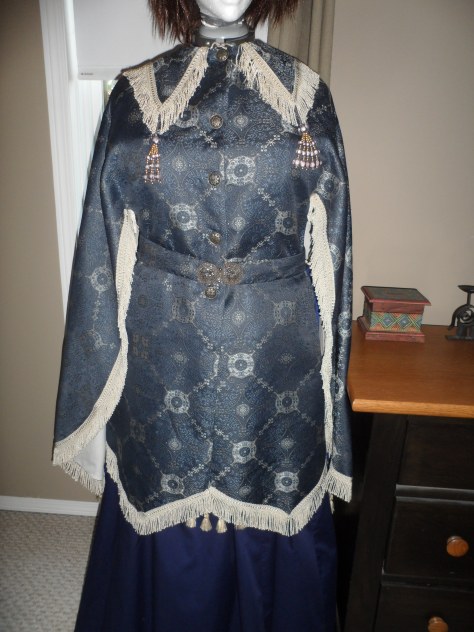 Added a buckle to an existing mantle.

Padded cap for a helmet. 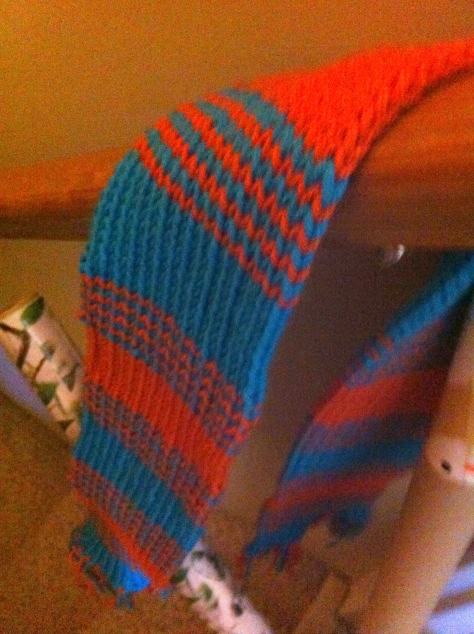 A cowl that I have since lost. Bummer 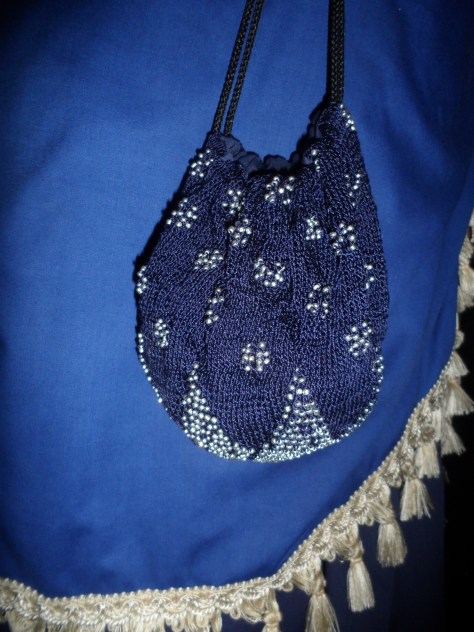 A work bag for my knitting

A costume for a friend. 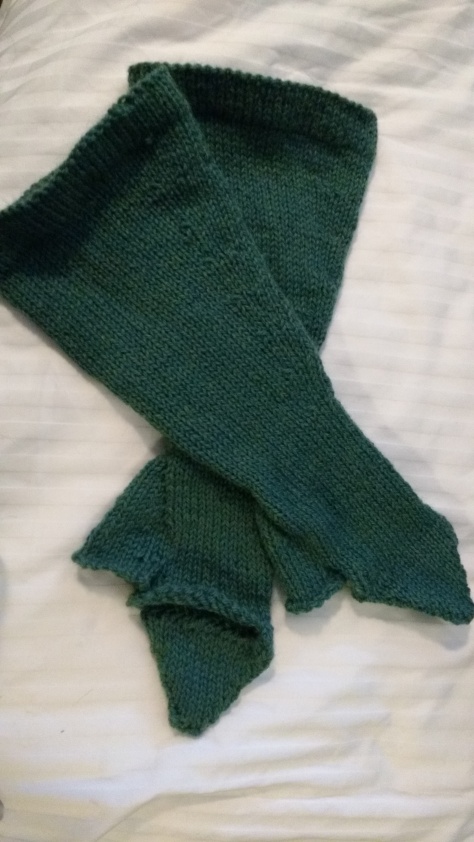 Fingerless mitts for a friend.

And fingerless mitts for myself.

The full ensembles are actually 5 projects in one: the bags which I showed in detail above, the bodices, the skirts, the over-skirts and the hats.  So all in all, a productive year!

I think my next year in review will be on the costumed events my tiny group indulged in.

I ran out and bought myself a Christmas gift this weekend.  Hey, who knows me and what I like better than me!  I saw a spinning wheel at a flea market a few weeks ago.  I haven’t stopped thinking about it so after a bit of wheeling and dealing (pun intended) I went home with this…

It is called a Spin-well Spinning Wheel 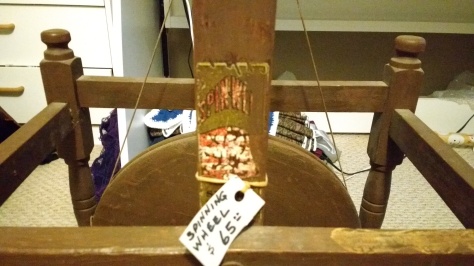 For a long version of its history I send you this well written blog post.  The condensed version is it was made in my part of Canada during the 1930’s to 50’s and was based on Ukrainian wheels.  It was known as the Sifton wheel (the town it was made) or the Spin-Well or Well-Made wheels (company names).

Before I try spinning on this, it needs a bit of a clean up.

And I think some of the bolts need some tightening so that it isn’t so wobbly.  At least I hope the bolts will help and that I wont need to get some carpenters glue on the other joints…. 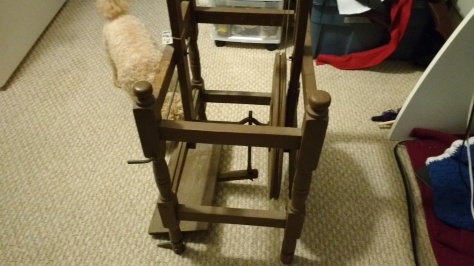 Some more research was not amiss.  I could find information on other wheels and I could figure out what part was comparable and thus how they should work but one part I had trouble figuring out was the tension adjuster.  Does it even have one?  Low and behold I found this blog that showed it did have one in the back behind the gear thingys and it also showed that the flea market seller didn’t have the wheel “strung” properly and so I will need to get another drive belt.  I will also have to learn the correct terminology for this machine.  I can’t keep calling the parts “thingys”

What the item is: fingerless gloves.

The Challenge: Redo: brown, practical accessory and silver screen.  Basically, I repeated the pattern that I did for silver screen but I did it in brown.  The green pair was given away as a Christmas gift.

How historically accurate is it?: Very!  My wool was probably a bit thicker than what they used.   95%?

Hours to complete: About 20

First worn: not yet

Historical Monthly 2016 is up now and I have my plans worked out now.  Some I’m more excited about than others but all will be useful at some point so here goes nothing!

January –  Procrastination – finish a garment you have been putting off. The mantle I started but got stalled on because it is ugly and I didn’t need it is the project for this. Perhaps some short fingerless gloves, using the left over wool from the long ones I made this year.

February – Tucks & Pleating – make a garment that features tucks and pleating.  I need more than one chemise so that is the plan.

March – Protection – make something to protect yourself from weather.  One of my pals has found reference and patterns to winter head gear called a Canadian cloud.  I may make arm warmers as well.

April – Gender-Bender – make an item for the opposite gender.  I’ve been wanting to make a gambeson for my son.

May – Holes –  Make a garment that is about holes.  Crotchless bloomers definitely have holes and I can use one more pair.

June – Travel – make a garment for travelling, or inspired by travel.  I will be traveling to the Dickens’ Festival again and a knitted Tulma would not be amiss.

July – Monochrome – make a garment in black, white, or any shade of grey in between. I’ve been a very unfinished woman walking around with no cap upon my head, begging dirt and lice and cold to take me an my hair to task!

August – Pattern – make something in pattern, the bolder and wilder the better. The paisley I bought at the Dickens’ Festival fits this description for sure!

September – Historicism – Make a historical garment that was itself inspired by the fashions of another historical period. Want to make Victorian leather gloves that hint back to the 1700’s.  I haven’t worked with leather in ages so this will be a challenge for me!

October – Heroes – Make a garment inspired by your historical costuming hero.  Most of my costuming heroes have made corsets that are functional.  My one attempt wasn’t very functional or authentic.

November – Red – Make something in any shade of red. I think a red knitted petticoat would be fun.

December – Special Occasion: make something for a special occasion historically.  Long silk gloves were in order for balls and formal dinners.  If I am really ambitious, they will be embroidered. 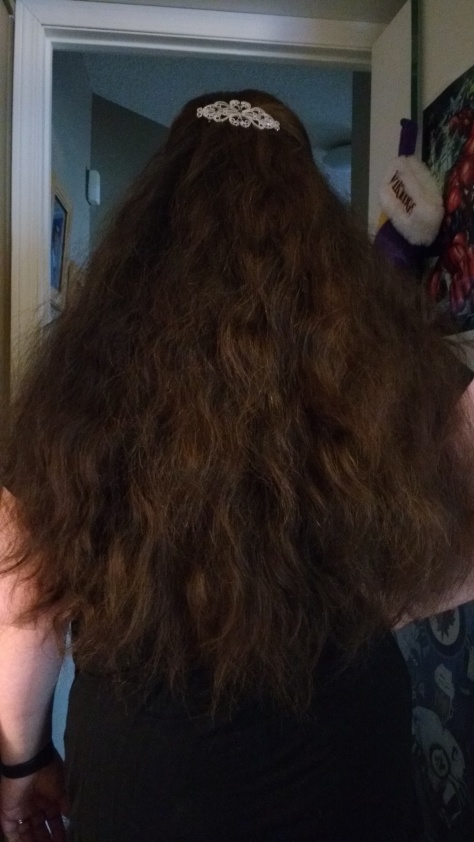 Saying good-bye to the excess weight…it is heading off (pun intended) to be a wig for a child. 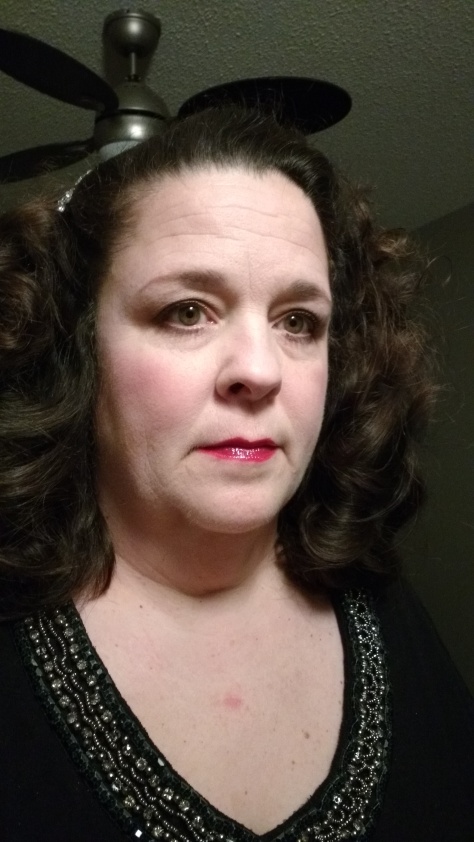 And seriously…I did weigh myself before and after the hair cut and I’m down 2 pounds. (1.8 pounds to be exact.  That translates to .81 kg.)

I am a big child and I can’t wait until Christmas when I get a gift in the mail.  I opened a gift from a friend and squealed with delight!

It was a little bag, two brooches and my favorite brand of lip stick.  The bag and one of the pins go very well with the fabric I bought last weekend!

I love it when a plan comes together!

I had a project in mind for this.  A cloak.  But, a few things happened.  1) The event I was making it for ended up not needing it.  The weather was too warm. So the drive to get it done “in spite of it all” was gone. 2) The dang thing is simply ugly.  I use synthetic fibers because it is easier to keep clean and it is cheaper and for the most part I find that the average person can’t tell the difference.  But the fabric I chose, once stuffed with the warm inner lining took on a very modern puffiness that seemed to make the fabric shine in a very ugly plastic fabric way. It also looked like a side line jacket for a football player. To get rid of that puffiness, I had to sew down the seams which seemed like such a unauthentic thing to do.  It was becoming more and more hopeless as a possible entry.  3) All of these factors have left it in the UFO pile until I decide what to do with it.  The garbage bin is a distinct possibility.

So I need another entry.  Instead of the cloak in the picture below, I’m aiming for the gloves. 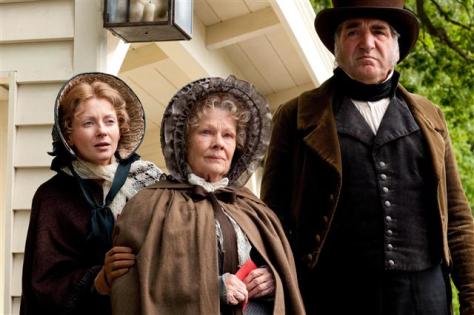 I was looking at the gloves worn by Judy Dench.

What the item is: fingerless gloves.

What’s your onscreen inspiration?: The above photo

How historically accurate is it?: Very!  My wool was probably a bit thicker than what they used.  And perhaps not this color so 90%

Hours to complete: About 20

First worn: not yet