I finished this yesterday and it is only a few days late!  This project has some successes and some loses. 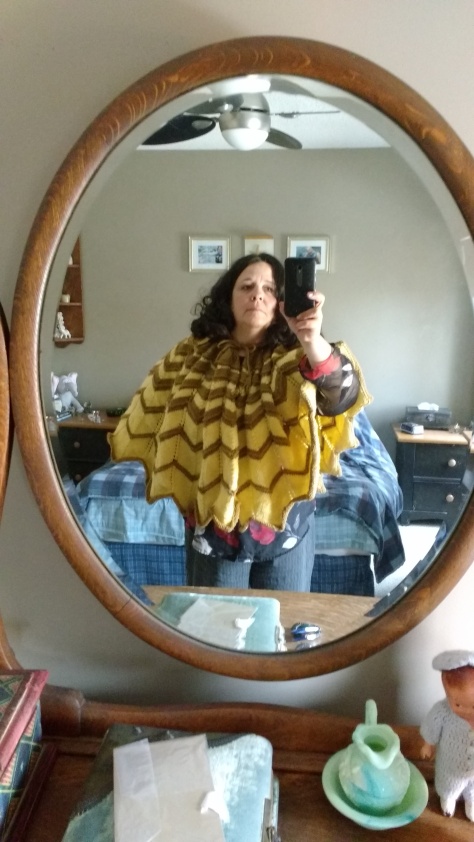 The successes are: it is wearable, I will be glad of it on cold days, I figured out the vague parts of the pattern so doing it again will be easier and I figured out just how much wool I would need to do it again properly.

The failures are: the mass of old yarn that I had in my stash turned out to not be massive enough, and the yarn was more or less retro  with the brand being discontinued-getting more was impossible. The shortages meant I had to do a lot of fiddling with the pattern to get something useable out of it. Fiddling with the pattern means I didn’t get to make up the pattern as it was originally intended (and that was disappointing.)  But, the learning process was a good one and I actually enjoyed the actual knitting so on the whole this project was a small win.

The Challenge: 3 protection (against the cold)

How historically accurate is it?: 40% The colors are plausible.  The pattern is original.  A woman would have adapted the pattern for size and available supplies just as I did.  The yarn is wrong because of the acrylic in the blend but there was enough real wool in it to give it that lanolin kind of feel.  The yarn was a looser twist than would have been used in the Victorian era.  The strand was also thicker than I believe would have been common.  At least, the knitted objects I have seen in museums were made of a tighter thinner strand.  The benefits to my thicker strand are: increased warmth and my finished item ended up bigger which compensated for the tendency for Victorian patterns to make up much smaller than my modern, well fed frame.

First worn: yesterday for the photo

Total cost: free.  It was a stash buster.  The wool was given to me.