In the past few years, I have volunteered at the old jail for Doors Open.  This year I decided to change it up.

On the Saturday my costume group, Truly Victorian, went to 3 venues.  And on Sunday I volunteered at Dalnavert House museum.

The cemetery and church was the first stop.  Lottie and I went in 1840’s attire and Shirley was in later styles. 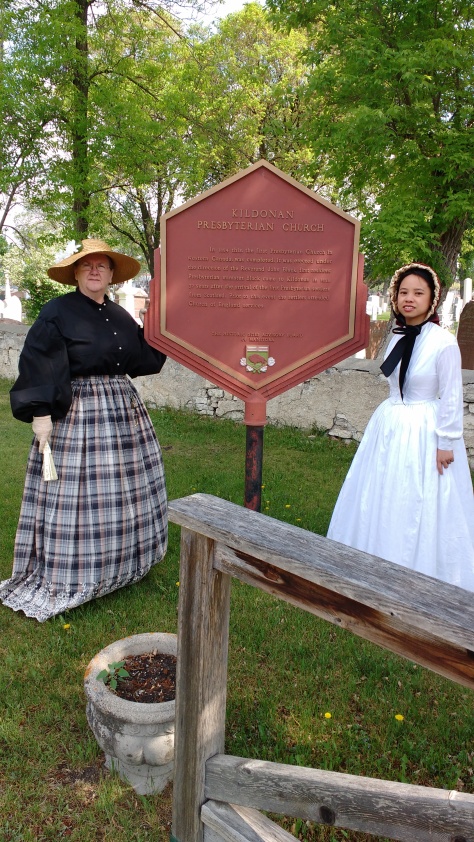 Of course when one goes to an old cemetery, one wants to see old graves.

There are the sad ones of dead babies.

The ones that reveal family tragedies.

There are the stones that make you angry. Like this repaired one. There were several like this that possibly fell victim to vandals. 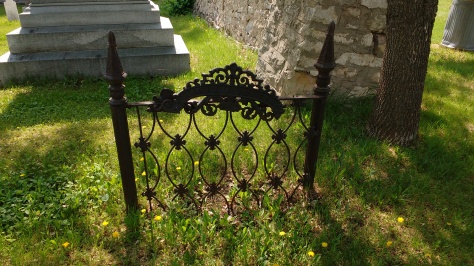 And there are the ones that are creative and beautiful.

The church, built in 1852, is under restoration at this time but we were allowed to go in and see it.

The balcony was off limits as it is no longer safe.  But the main floor, in spite of needing a little TLC is in good shape.

The stain glass, which was added in the 1920’s, was my favorite.

And of the 4 of them, this was my favorite both in terms of the picture itself and because I recognize the Henderson name as I lived a few blocks from a street named after that family.  And on Henderson, there is a church named after the pastor that originally founded this church, John Black.

When we were done looking at the interior of the church, we walked around the exterior to see the work that had been done.

For those of you who liked to be a bit grossed out, I have to show you what I saw next to the door on my way out of the church. 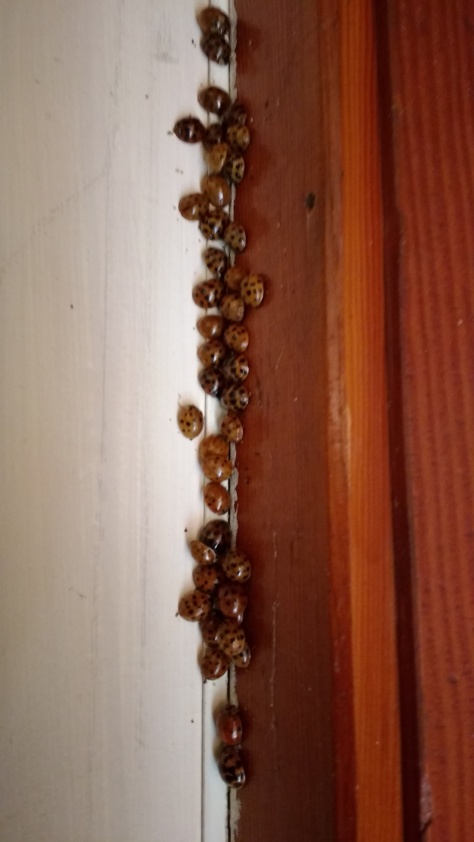 I used to like Lady Bugs but last year they introduced an Asian variety to our city in hopes of controlling aphids.  Those little devils bite.  I can’t tell if these are the Asian ones or the nice kind but even the nice kind are gross in huge bunches!

My group, Victorian at Heart, launched our costuming season this past Victoria Day.  We dolled ourselves up and headed out to Lower Fort Garry to tour and take photos.

Here is Shirley in her lovely plaid ensemble.  Love the jaunty hat! 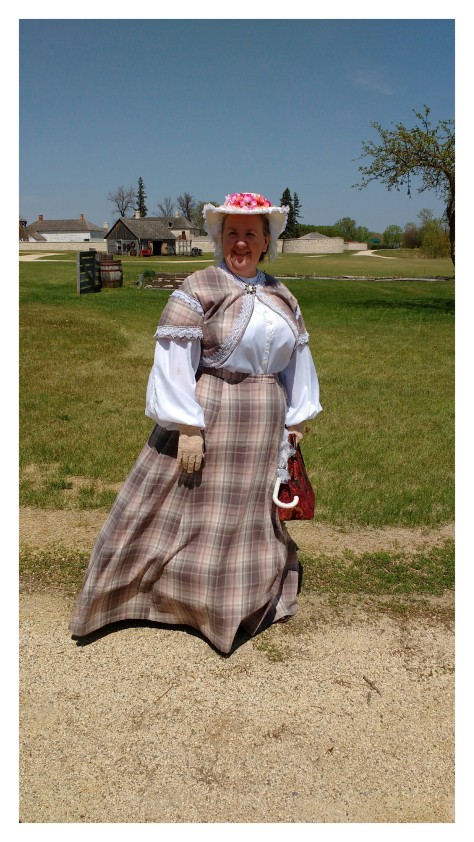 Lottie is in a lovely golden print. She had fabulous curls under her hat! 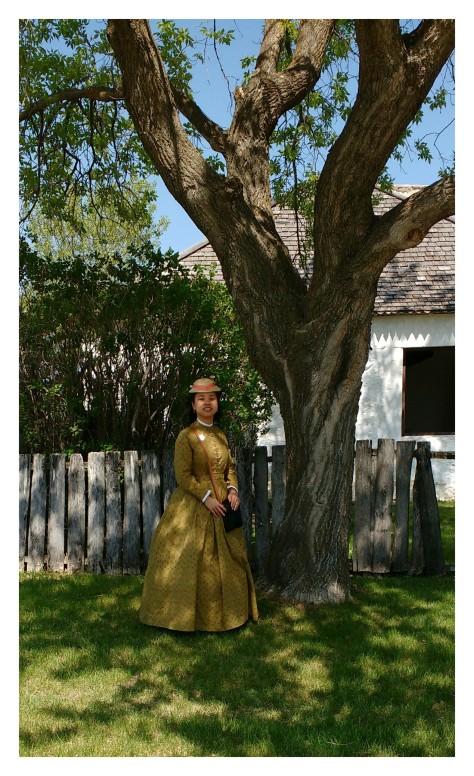 These lovely ladies were not to proud to shake the hands of the day maids.

I wore my 1861 Señora dress.  I left off the jacket because it was just too hot.

I had fun with my phone afterwards, playing with filters and frames. 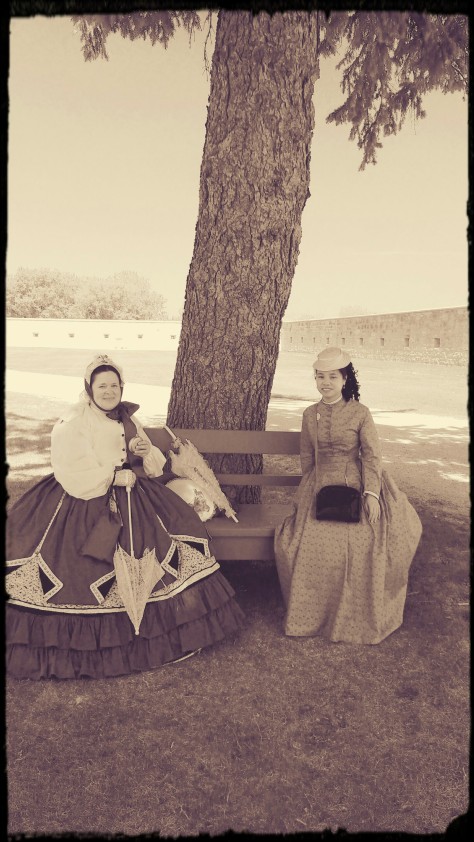 The highlight of the day was the dance in the men’s quarters.

And after a little of the Governor’s rum (aka iced tea) I took a twirl on the dance floor too. 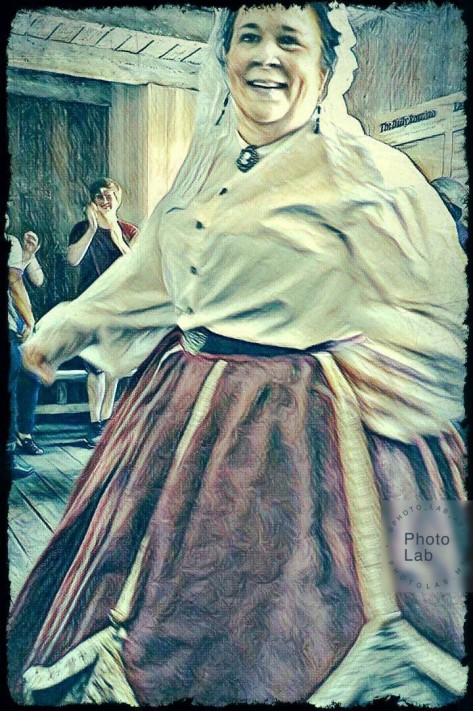 We all know that I’m a fan of the Victorian era fashions but some of the Edwardian fashions appeal to me for modern wear.  The coat I will show you today is just such a thing.

It is part of the Costume Museum of Canada and will be going on display at the end of the month. 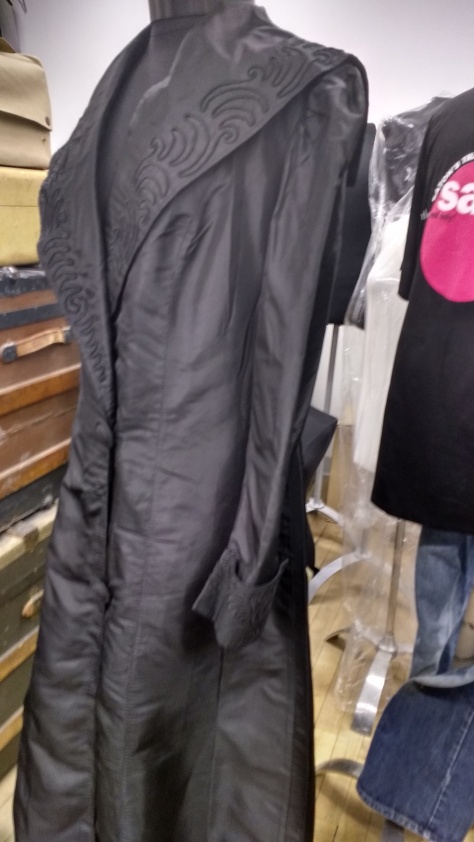 It is attributed to the Eaton’s store.

I love the detail on the lapel and sleeves.

Would you wear this today?

As I have mentioned before, I am back at the Costume Museum and we are preparing for an exhibit in a few weeks.  One of the items on display is an Edwardian jacket with lace inserts. I would wear this today.  May be not in white because I can’t keep anything white for long.  I’d no sooner put it on and I’d run afoul of a pot of tomato sauce.

(Ignore the odd pink fabric near the bottom.  It is the lining of the skirt which was being held up for steaming.)

The buttons are Dorset buttons.

The buttons are also featured on the sleeves. 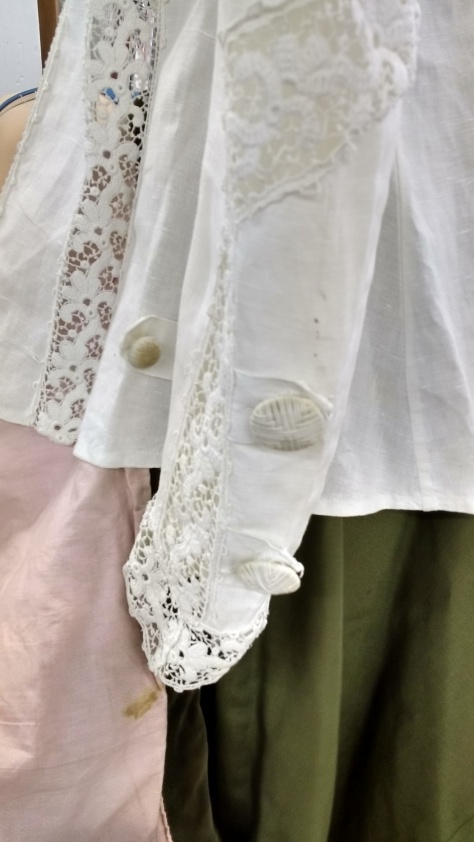 In the side view, there is a small lace panel and button at the hip just under the sleeve. 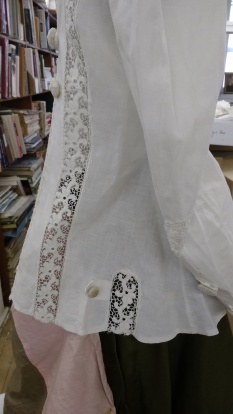 The jacket was paired with a dark green skirt.  And this is what it looks like all steamed out.

The last time I turned the page we had two sets of family portraits. 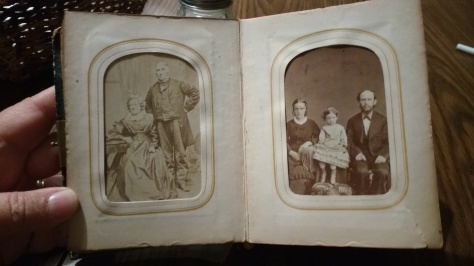 The older couple was examined last time so the young family is next.

the little girl is looking quite sullen but mom is almost smiling!  Her dress is quite nice with the bows all down the front.  I do love the little girl’s shoes. 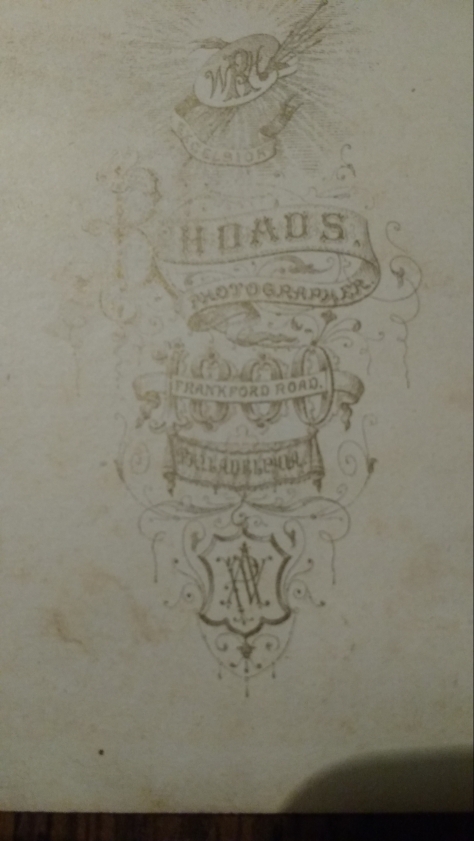 The photographer was in business on 1800 Frankford in Philadelphia from at least 1861-1896.  I’d hazard a guess on date as being in the 1870’s because the card corners are rounded, and her hair and dress say 1870’s.  The clothes of all three seem to be well made and in good shape so I think they would be new and therefore current in style.

The Costume Museum of Canada is putting on a display this month of things attributed to the Eaton’s store.  I steamed out a wedding dress from the 20’s that has an amazing amount of detail for a store bought item!

It is a very fine fabric that would have been wonderfully cool for a summer wedding.

The collar has embroidery and tiny little tucks. 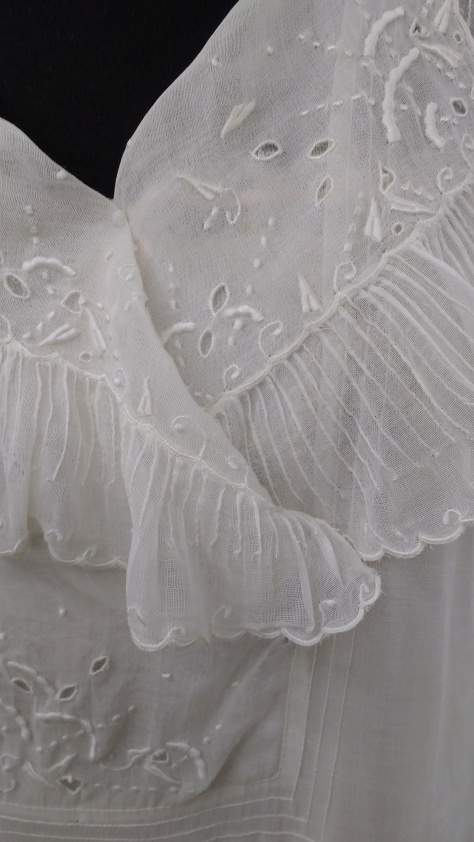 Those tiny little tucks are also on the back.

There are little tucks and bigger pleats and two little panels that are like little pockets.

The same tucks and pleats are on the back but minus the little pocket things.

There is a sash that I didn’t know about so didn’t photograph.  I liked it better without the sash.

Man, it is good to be back in the museum!