I’ve been neglecting this space and I am sorry.  Life is just…well life.  This past week for example has been overwhelming to say the least!

A week ago Friday, I tripped and hurt my knee which made me struggle with walking for about 3 days.

Then last Monday, my first born and his wife left the country to travel for 7 months.  When that 7 months is done, they will decide which country they will live in.  That same day, my youngest son took over my oldest son’s apartment.  He moved out and I have an empty nest.

Last Tuesday, I found out the reason why my mother did not come to the airport to see her oldest grandchild off…she was in Emergency with a racing heart.  Sigh.

Last Wednesday, it was confirmed (what I feared) that come January my work position will be cut in half because of budget cuts.  Work saves money and I loose money.  Suddenly, I will have way more time so may be this will mean I will finish projects I’ve abandoned and start projects I’ve been dreaming of.

I’m trying to focus on silver linings.  The oldest boy perhaps moving to another country will expand my opportunities to travel.  The youngest boy moving out means I have succeeded as a parent and launched two functioning adults.  My knee healed after only 3 days.  The hospital was able to settle my mom’s heart and she is now being followed by a cardiologist.  And soon I will have time to finish projects, prep my house for downsizing, take care of my own health, and look at other types of work that I have been wondering about.

Anyway, thanks for hanging out and waiting for me to get back to work on this blog!

The back cover of my carte de visite book had some news paper clippings stuck on the back.

I’m going to try and figure out who they are.
The guy on the top left is Charles Tupper and he was Prime Minister of Canada for a very short while in 1896. He is connected to Hugh John MacDonald, the owner of Dalnavert house. Hugh’s partner in his law firm was one of Tupper’s sons and Charles Tupper himself, made Hugh the Minister of the Interior in April 1896.

Here is a photo of the two together. (A copy of this hangs in Dalnavert). 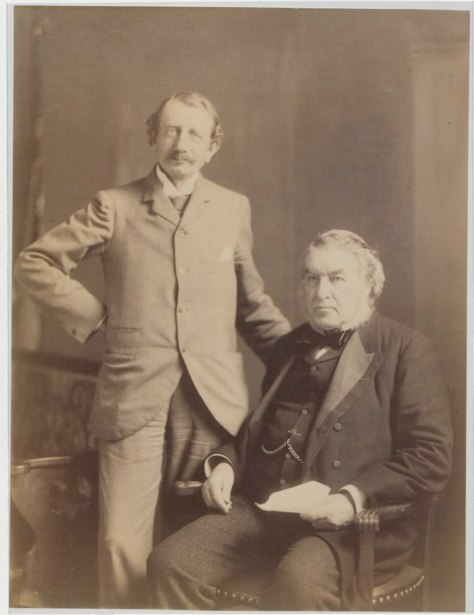 The next drawing is of Benjamin Disraeli who was a Prime Minister in the United Kingdom.  There was a street in Winnipeg that eventually became a Freeway called Disraeli and it was named after him.  Here is the photo the drawing was likely rendered from.

The guy on the bottom left is Fredrick Temple also known as Lord Dufferin. 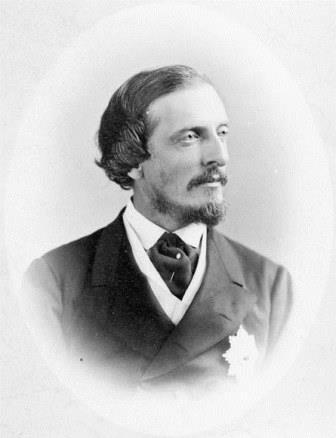 He was a Governor General of Canada and he is also connected to Hugh John MacDonald.  As the Governor General of Canada, Lord Dufferin had contact with the Prime Minister and Hugh’s father, John A MacDonald.  Lord Dufferin made John A the god father of one of his children. There are a few things in Winnipeg named after this guy and his family…including our old train named the Countess of Dufferin now being stored in the Union Station Rail Museum.

The next guy was John Campbell the Marquis of Lorne, husband to one of Queen Victoria’s daughters.  In 1878 Lorne was appointed governor general of Canada by British Prime Minister Benjamin Disraeli, to succeed Lord Dufferin.

The last guy is Matthew Vassar, founder of Vassar Collage. He doesn’t seem to fit the pattern and I can’t even guess why he is there. Most of these guys are major political characters in Canada’s history.  All these political types hung out with each other and with royalty.  And for some reason, the owner of this album found it significant to include these pictures in a family album.

Most of the remaining photographs are more modern so I’m just going to throw them all out there with only a few comments. First up…some dapper dudes.

In the photo on the right there is this guy lurking in the back.  Looks like a gangster.  Just sayin’. On the back it says “Richard, Ralph and self”.   And here is a couple… looks 1920’s to me but I’m no expert.

On the back there is written “Beatrice the eldest and her husband. he is a famer at North Deighton Wetherby”.

Love the doggy in this next one! 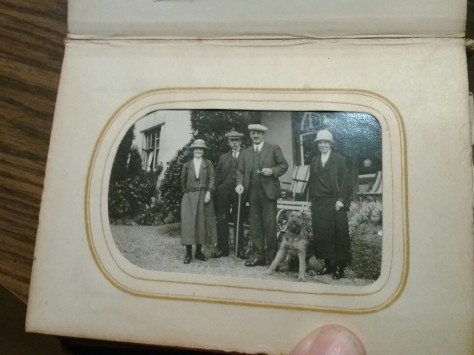 Next to the doggy photo there is another guy on his own.

A few pages later, this guy has a photo taken with a woman.  I guess these are not in any kind of chronological order. On the back of the next photo is written, “Taken at Field House May 1930.  Father 82 Dorothy 22.

The building is for the news Paper “The Public Ledger” in Philadelphia.

My guess is the next two photos are the same family but different times. And the lurking guy in the background and kid with the crossed arms from the first set of photos are the same people.  The back has written Nellie Ralph and self.  So Ralph is the kid.  Self is the lurker. That makes the guy in the top photo Richard.

Then there is this random photo of Victorian kids thrown in…

Then back to more modern things.  Love the old guys beard!

Then there is a house and a SUPER cute kid on a great toy (that I would have loved as a kid!) On the back of her photo are the words “Joyce Lister 1 year June 30th 1930”. 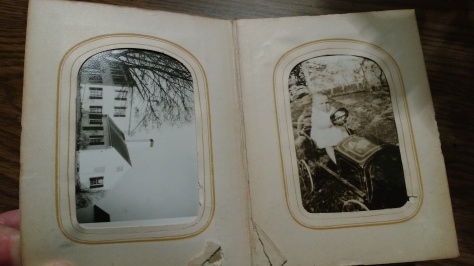 On the back of the photo of the house…”Our home taken last Thanksgiving Day”.

A couple of older ladies with their dog.  Looks like a friendly beast!

This last phot had some writing on the back. 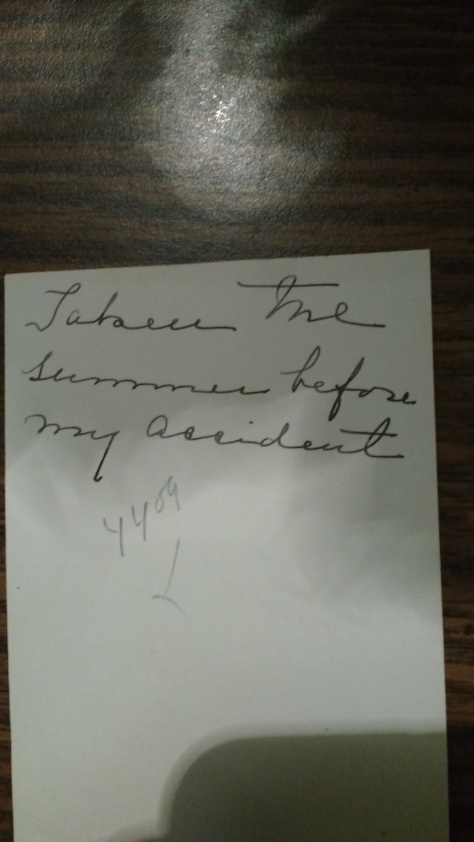 And finally the back cover has some newspaper drawing glued onto the back.  I guess I should try and figure out who they are so that I can possibly figure out where the book comes from.

I’m almost at the end of my carte de visite book.  The next page is a child and then the more modern photos start to appear.

How did that woman get herself up on that fence post? 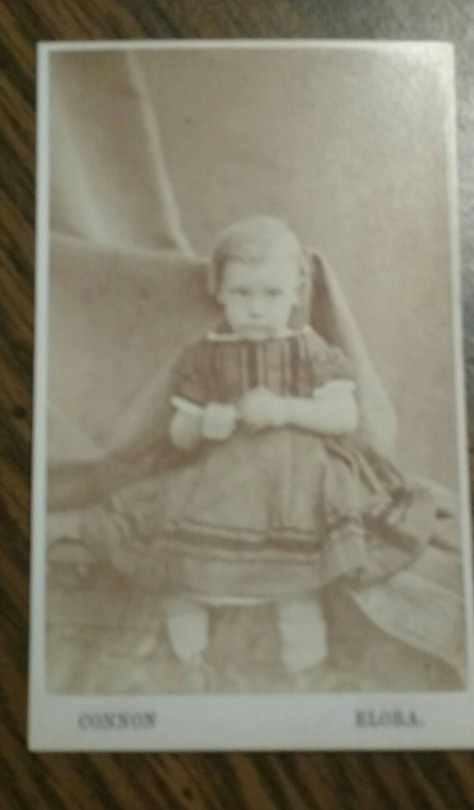 (Sorry for the blurry photo.)  Don’t worry, there is a better one here. I guess they had more than one copy of this photo so they slid it to the back of the book.

I realize my posting has been a bit spotty of late. Drama at work (potential department cuts) has left me uninspired for posts and for completed things to post about.  Pretty sure you are not interested in seeing my completed coloring pages and jigsaw puzzles! My group and I are also not getting out in costume lately…partially due to busy schedules and partially due to my energy slump.

But in the interest of letting you know that I have not died, here is a quick post about my carte de visite album. 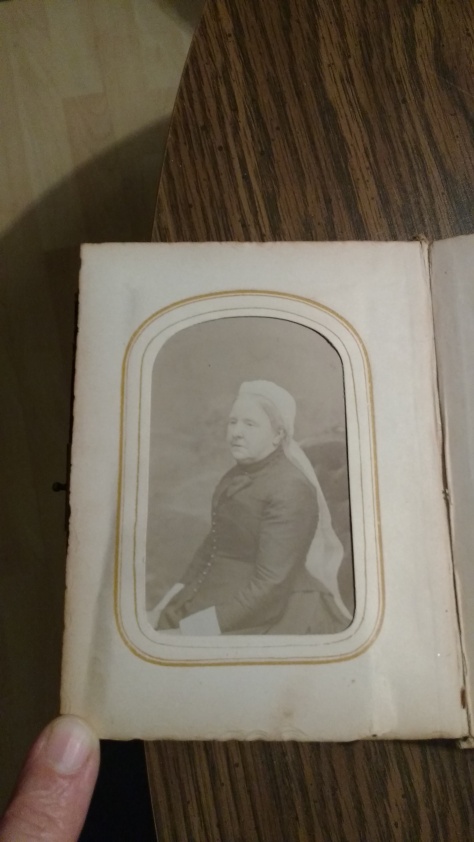 Queen Victoria’s doppelganger or what! I find the profile sitting interesting.  Was there a reason for that?  Something on the right side of her face she is trying to hide? Trying to draw attention to the head wear?  What is the thing she is wearing on her head?  Is it purely a fashion statement or does it mean something?  Not a nun, but a nurse perhaps?  If anyone knows, be sure to share.

Out of the sleeve, we get no further information. There is no photographer’s stamp on the front or the back.

Now for the gent…

Taking him out of the sleeve reveals one thing…these two photos were likely not taken at the same place so it is harder to speculate that there is some sort of tie between the two.

The style of card stock is different and the gent has a photographers stamp.

We seem to have his birth and death written on the back.  (A good 84 years of life!) So possibly these were reprinted after death or the dates were added later?  I read the word on the bottom as Rebecca’s.  Perhaps the person handing out the photographs, wrote the name of the person who was to receive each one?  I know I have done that with my kids’ school photos.

That’s it for me today.  I can’t say there will be effort on my part to post again this week.  I’m expecting some major developments this week in regards to the work drama so depending how the chips fall, my motivation will either rise or fall…we shall see.