As the restrictions in Manitoba slowly lift, hubby and I decided to do some thrifting in a local flea market.  Some members of my family thought it was far to soon for us to be doing that (and I respect that) but with Manitoba having done so well in this crisis (322 cases in total, 300 recovered, 7 died, 15 active) I felt with some social distancing and hand washing it was worth the risk.  Not a necessary outing but good for the spirits none the less.

I found some jewelry that I rather liked.  It was brooch and a set of matching earrings.  Not Victorian (alas) but charmingly vintage.

Oops! I was holding that earring upside down.  That’s what happens when you do stuff like that without the reading glasses! 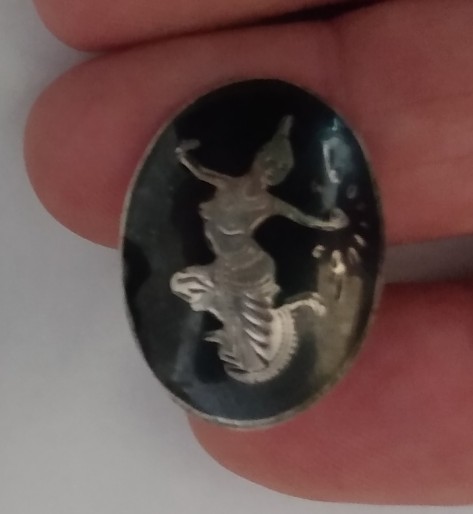 Dang too blurry!  You get the idea and I’m too lazy to get up and redo the photo.

A Google search revealed that they are vintage Siam silver niello jewelry. One blog (click here for the link) says:

“These stunning creations were hand made in Siam (now called Thailand), and the figures, buildings or animals created in the jewellery usually depict characters and scenes from Buddhist and Hindu tales and religious text. The country of Siam changed its name to Thailand in 1939, changing it back to Siam in 1945, and then was finally renamed Thailand in 1949…… Jewellery is usually stamped ‘Made in Siam‘ on the back, though later pieces were could be stamped either ‘Siam’ and ‘Thailand’.”

The earrings depict Mekkala the goddess of lightening and the brooch depicts Matcha the mermaid queen (it is because of her I wanted the brooch) and Hanuman the king of monkeys. I loved the story of these two.

“(Hanuman is) a clothed revered monkey-diety holding a sword. Sometimes shown with Matcha. This is due to a Ramakien tale of Hanuman being sent by Prince Rama to build a bridge over Queen Matcha’s Sea Kingdom, but the Monkey King falls in love with her instead.”

It is fun learning about new things.

Went a bit crazy with these.

I found a pattern meant for seed beads and decided to use massive beads…the massive size made it easier to work with while I figured out the pattern.

I will hang it in the windows at work. Now that I see how it goes together, I will make it in the correct size. I also want to see if I can adapt it to different types of birds. The beads used for Humphrey would make an awesome Macaw for example.