I love it when a plan comes together.  I worked on my Edwardian tablecloth shirt most of Saturday afternoon.  The sewing saints were smiling on me and the sleeves went in with not one stitch needing to be undone! 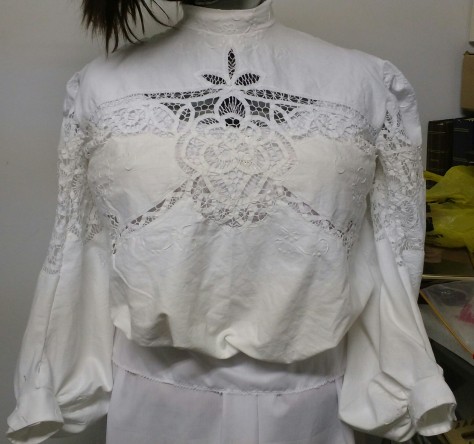 I am very pleased with how well they are hanging! 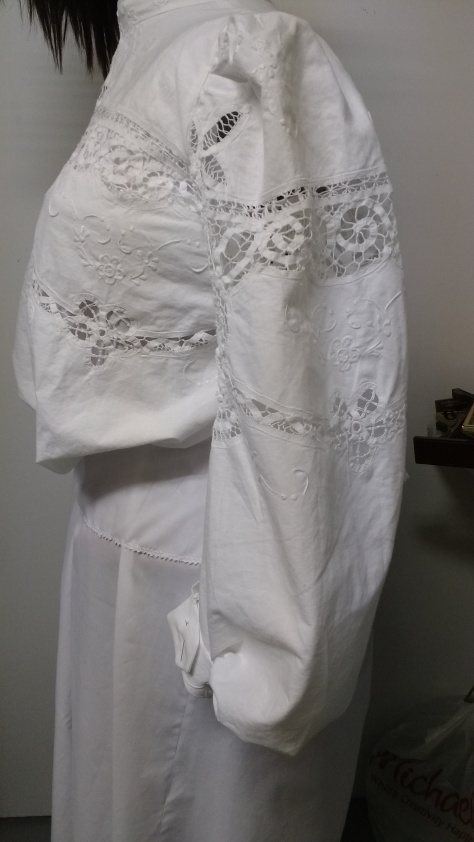 The collar looks pretty good I think.  I do wonder how it will fare with my double chin.  Even starched to cardboard consistency, it may succumb to the pressure. 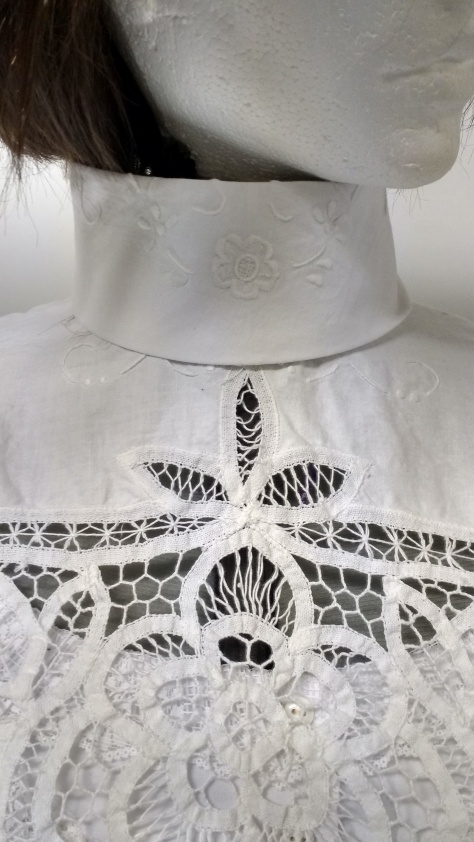 I pinned up the back to see how it looks.  The pattern matching went well. 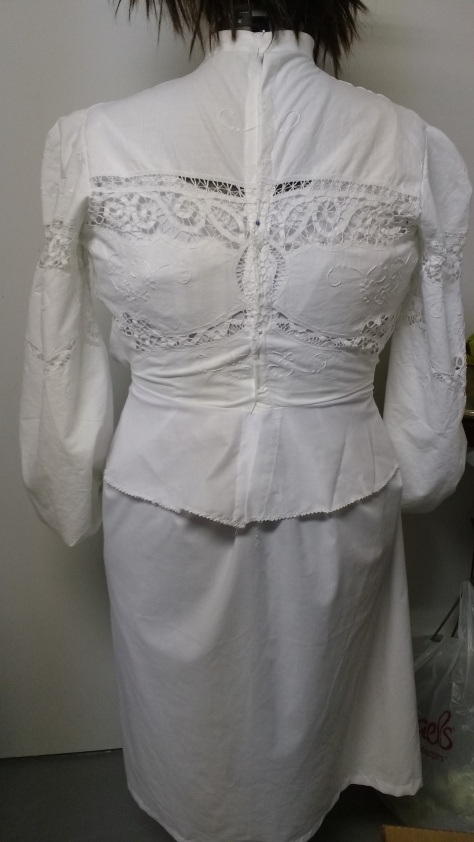 It seems a bit on the snug side. There will be gapes.  Hmmm. 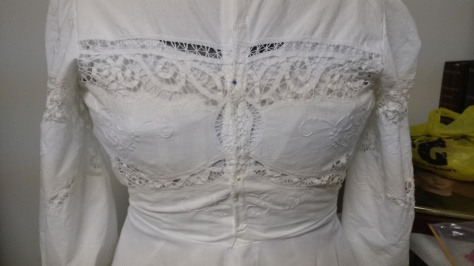 I think I will put buttons every inch rather than every 2 inches like the pattern suggests.  That may help.  If not, I will put some hooks in between.  Hubby with his clumsy man hands will love helping me with that!

The buttons, button holes and optional hooks are all that is left.  I have it in my mind that I want little pearl buttons.  The stash doesn’t have those.  I may have to do some Sunday shopping to get some.  The button holes have to wait until I know the size of the buttons or those would be done by now as well.

I’ve been dragging my behind on all my projects.  Last month’s HSF project is late.  The previous month was late.  This month’s will be too.  I think next year, I will create my own UFO project challenge and skip HSF-it isn’t inspiring me to get crap done any more. Perhaps it is because, with a huge wardrobe of costumes, I now no longer NEED to get things done or face costume events in the same dress.  I have something for everything.  Or may be I will create a challenge where the goal is to finish a really elaborate dress in stages (eg do beetle wing embroidery on the left sleeve in May, the right in June.)

Anyway, this past Easter weekend, I tore myself away from my latest binge of the Sims game and got some work done on my table cloth becomes shirtwaist project.

I got the skirt part attached.  It is the part that gets tucked into the real skirt.  I didn’t have enough table cloth for that so I just used a cotton broad cloth.  It shouldn’t be visible so it doesn’t matter. 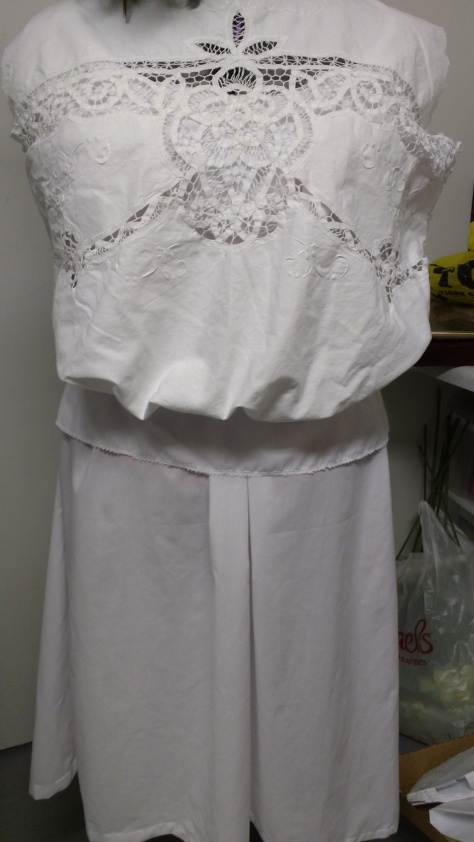 The next step was to finish the opening on the back.  This involved an extra step or two as the lace created huge sections where there would be nothing to attach buttons and button holes. 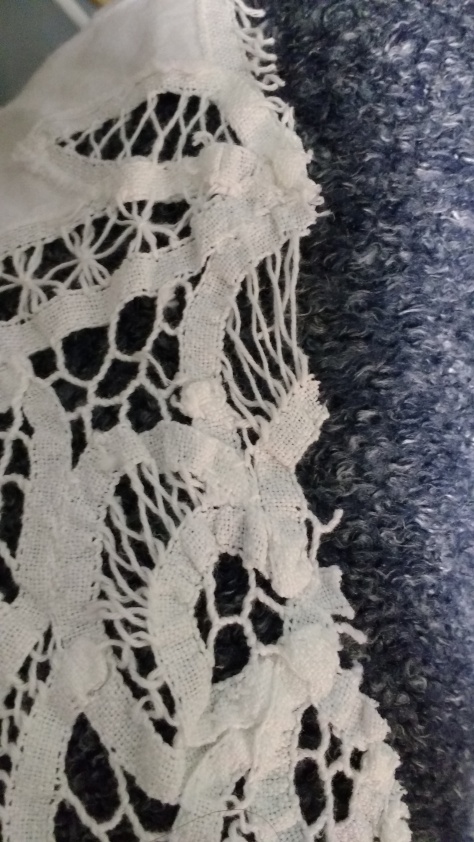 The pattern piece for the back has lines that show you where the folding under is to be done to create the strong finished edge.  I made a pattern piece the same length and width of these lines and used it to cut out long rectangle strips from the table cloth. I sewed those onto the wrong side of each back piece. 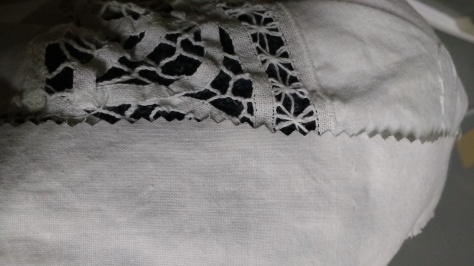 Wrong side of back piece. 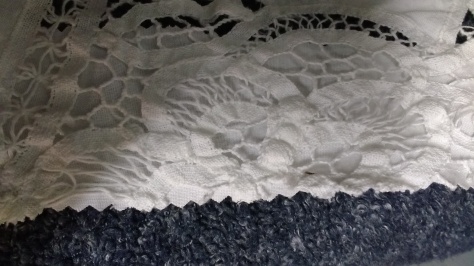 Correct side of back piece.

Basically, what I did was flat line the portion that needs to be folded over. Then I continued as instructed.  Once all the folding and sewing was done, the lining and frayed cut lace is hidden and there is enough strong material to support buttons and button holes. 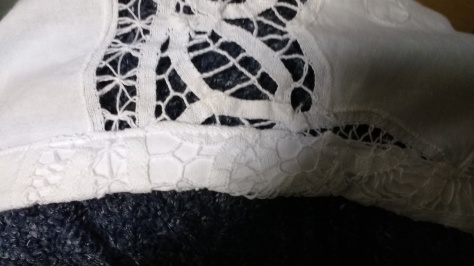 This is the wrong side of the back piece all tidied up and strengthened.

Next step was to get the collar attached. 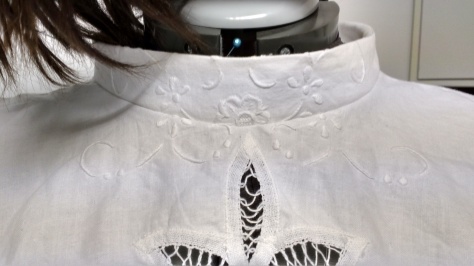 It will have optional collar attachments but is pretty enough to stand alone.

I also got the sleeves sewn and reinforced and the cuffs made.  Next step is figure out which sleeve and which cuff is left and right then attach the cuffs and the sleeves to the correct spot (hopefully only doing that once per sleeve).  Then I need to make the optional collar, hand stitch the inner seams of the collar and cuffs down, make the button holes and sew on the buttons.  If the sleeves don’t get me, I could have it done next weekend.  (Fingers crossed).

You know how projects can be: two steps forward, two steps back and a little side step or two.

The steps foreword happened with my Edwardian blousewaist.  I have sewn the main seams on the body.

I like the way the embroidery and lace look but I’m definitely going to have to get a corset cover organized with this thing (and a proper Edwardian corset)!

My idea for dealing with the lace at the seams (bias tape) seems to be working. 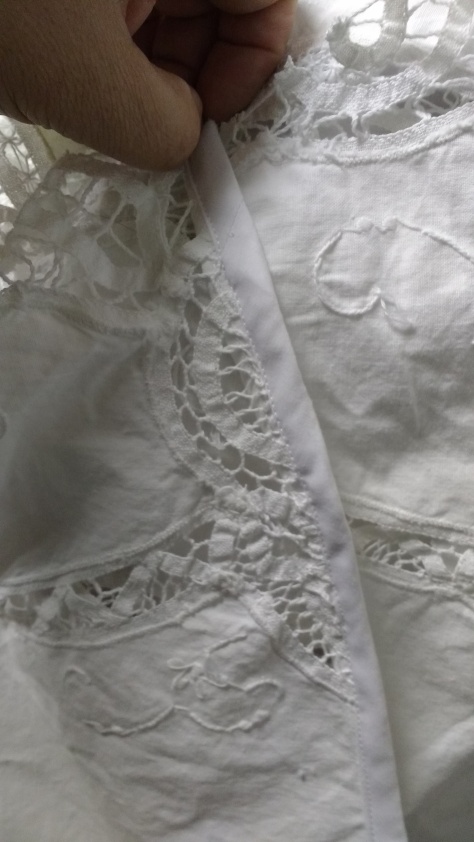 Two steps back: that happened with my knitted undersleeves.  I’m going to have to take them apart.  They are just going to be too tight.  I don’t know how tight they are supposed to be but I’m pretty sure they weren’t going for compression garments or arm corsets.  I had hoped that I could just follow the instructions and count on heavier wool and bigger needles to make up the difference but it wont.  Drat that means I will have to do some math to figure out how many rows and stitches I need.  Since I was starting from scratch, I thought I may as well buy a second color and see how it is supposed to look with the stripes.

And the side steps: I made an impulse stop at a thrift store and picked up some wooden knitting needles (like I need more) and this fabulous strip of sari fabric. 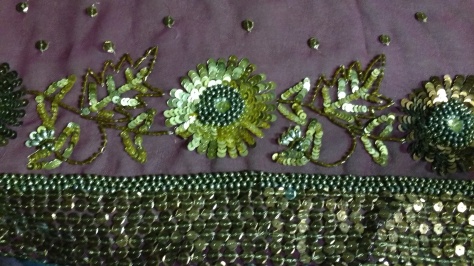 Obviously I can’t use this for Victorian wear.  And it is a bit much for modern work wear.  I’m thinking an over the top beach wrap. 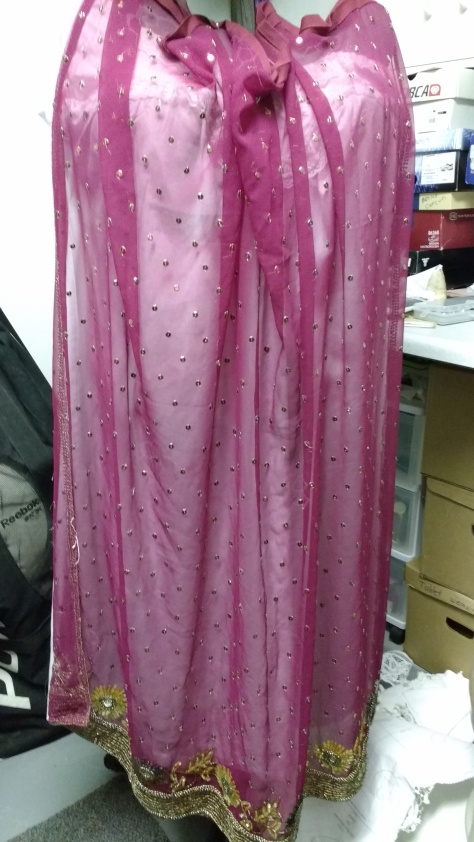 Well, have a good week folks.  Hopefully, I will be disciplined and be back in a couple of days with some progress to share.

A few weekends ago I bought a vintage Battenburg table cloth with the intensions of cutting it up and making an Edwardian blousewaist.  But once I laid it out, I began to have misgivings. 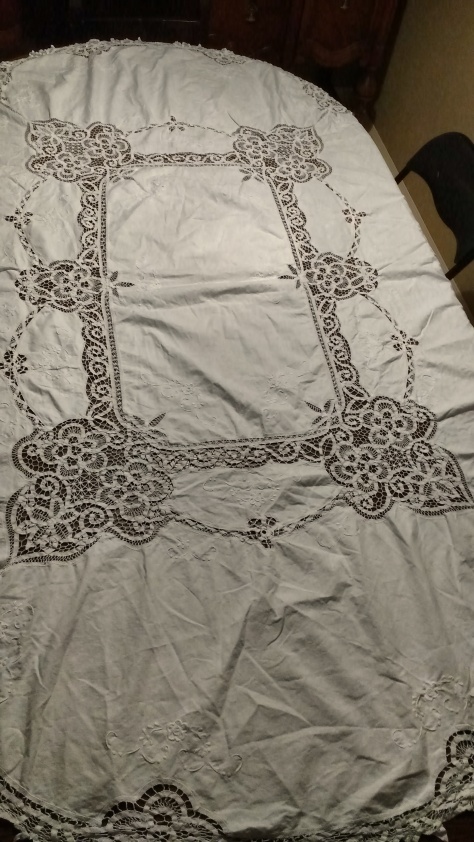 The dang thing was really pretty and someone went to a lot of work to make it.  I swung back and forth.

SAVE IT: It is pretty.  If it were properly ironed and if my table was shrunk down to its smallest size it would look very nice in deed.

JUST DO IT: I did iron it and it did look nice but ironing it caused me to notice the little stains that probably pushed it into the discard pile of someone else’s life.  The fact remains that it will be a few years before I can keep my table at its smallest size and then I will promptly dump gravy on the table cloth and ruin it.

SAVE IT: It is old.  One doesn’t just paint an antique oak dresser to up date it!

JUST DO IT: It is likely more vintage than antique.  And one does paint over an old pine dresser to up date it.

JUST DO IT: I’m going to get more use out of a costume piece than I will a table cloth.

So I did it.  Once the first cut was made, I was committed. All that is left of the table cloth is a pile of cut out pieces. 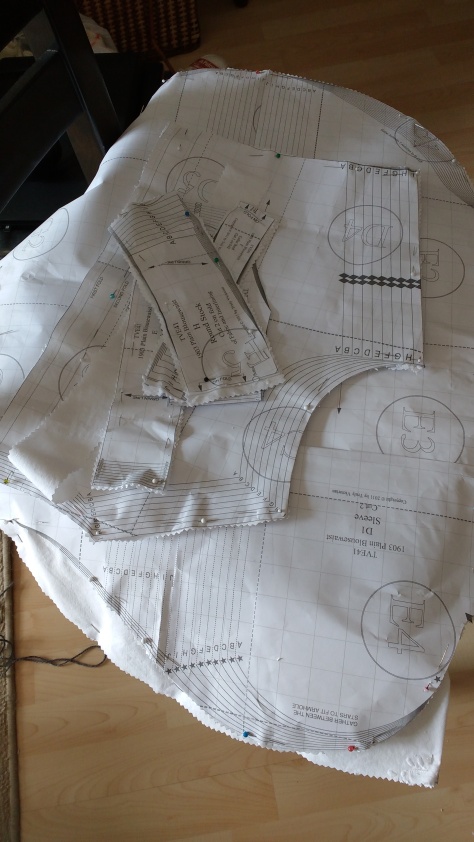 There are a couple of Battenburg medallions and a few random bits of the embroidery that will idle in my stash for a few years until I can come up with a good use for them.  Trim and blocks on a quilt? 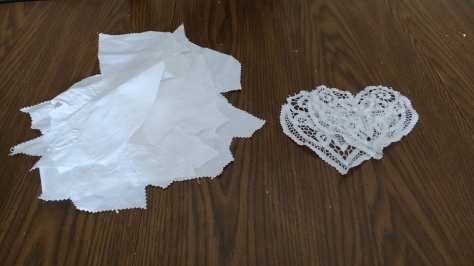 There is a massive strip of the lace from the edge of the cloth.  Most of it is in good shape though some of it had to be nicked to get the pattern pieces cut out-if only I was a size 2.  The lace strip will also idle in my stash. 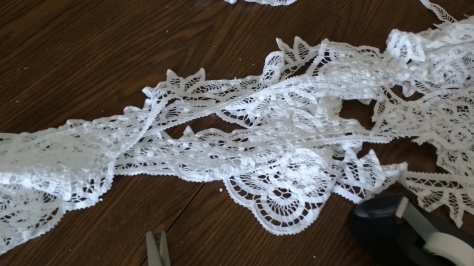 And there is the smallest bit of garbage.  I may have desecrated an old thing but I sure wasn’t wasteful! 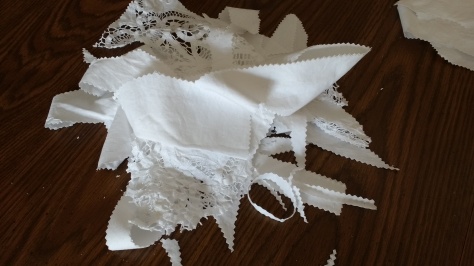 Nothing left to do but clean up the mess.  The scene of the crime if you will. 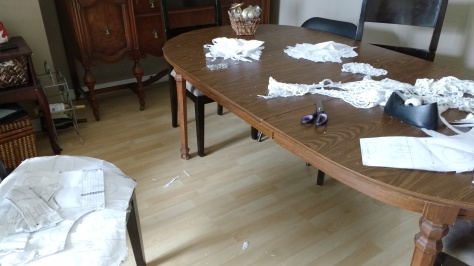 There was enough fabric for the whole project except for the optional skirt that goes at the bottom. 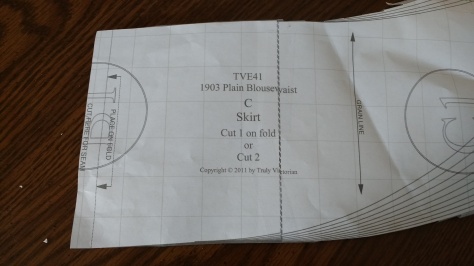 You can have a skirt or “peplum” that gets tucked into the waist band of the skirt or you can just have a plain band that seems to just get covered up with a belt.  I’m going to root around the stash for some white cotton and make the band from that. It wont be a perfect match but it will be hidden and it wont be glaringly obvious…I hope.

Something else I have been considering…when I sew it together, there will be sections of seam that will be unstable because it is cut lace rather than solid fabric.  I think the way round that will be finishing the seams with bias tape.  I’m classically lazy and rarely do anything with the seams.  I know lots of sewists who take great pride in their whip stitched seams or their pretty French seams but I hate them.  But in this case I’m going to have to stifle my laziness and commit to bias tape.  I see a trip to the fabric store in my near future or a few hours of mindless cutting and ironing….