I send activity care packages, weekly, to my seniors in my club. (COVID has shut down the club I work in). This week, I decided to get them ready for the second wave. (Our first wave has been easy breezy…I think our luck will run out soon).

I hauled my machine to work and emptied out my stash a bit and got sewing.

Once they were all sewed up I got them ready for mailing.

I think they turned pretty well. There was some fun fabric that I hope will encourage them to use them when they are out on the town.

This hasn’t been the greatest year for outings.  A lot has been happening in my little groups’ lives: work, school, health, family…and that has definitely slowed us down.

But we did get out a little bit. And I did my best to wear things that didn’t get used in the past while.

In May we got out to the old fort. 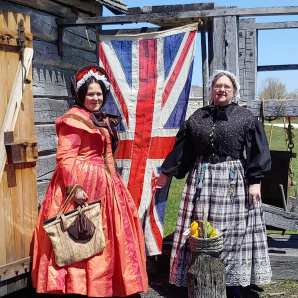 And I helped out at the old Jail.

In July, Lottie and I made it out for some tea.

Then nothing until October.  Lottie and I took our annual train ride.

And I was Queen Victoria for Halloween. 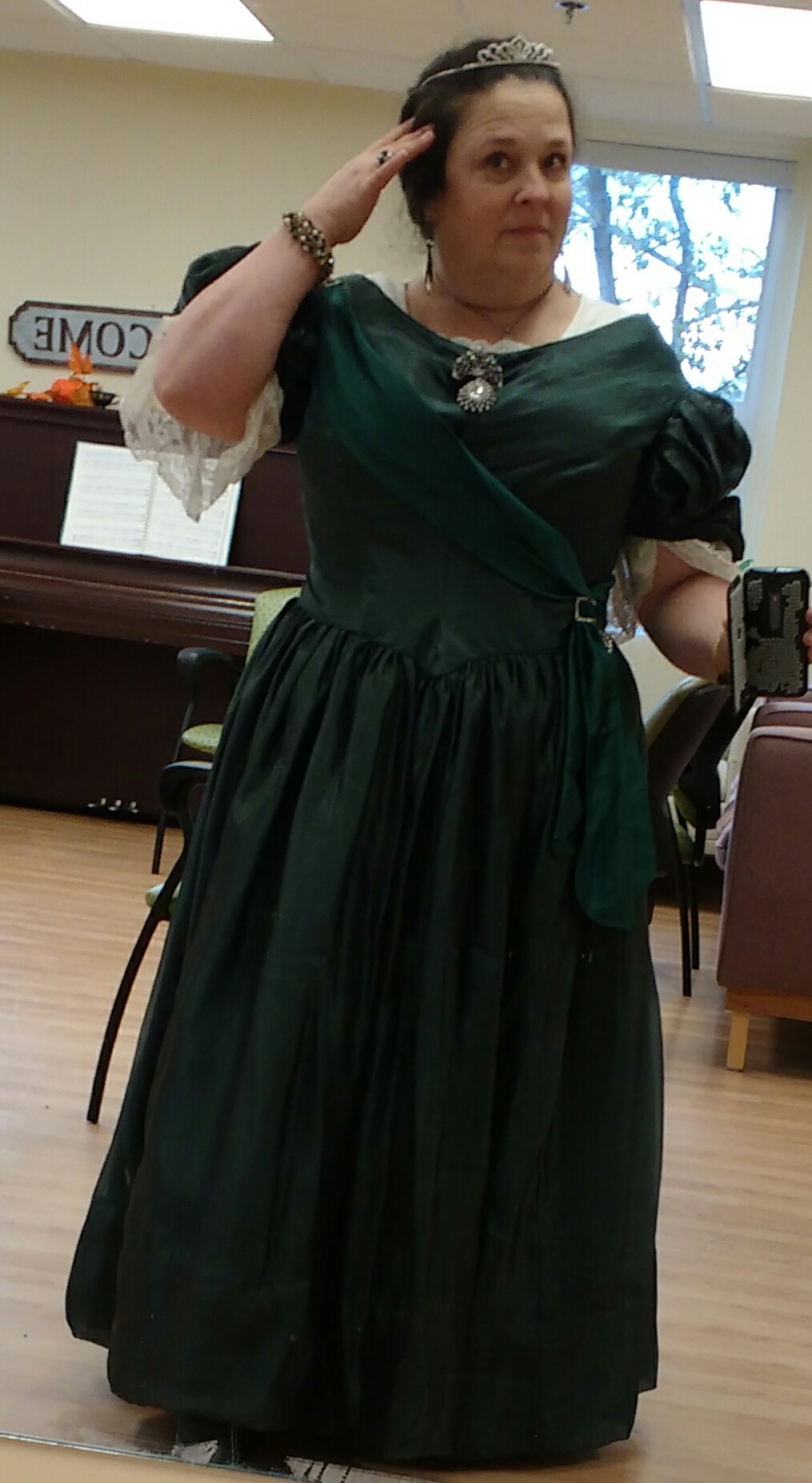 And finally, the girls and I got together for a Christmas party.

Shirley wound a skein of wool into a ball.

Lottie added a few more rows to her Canadian Cloud.

Perhaps after our winter break, things will pick up again.  I sure hope so!  But even though our outings were few and far between, they were still quite fun!

A year ago, I was an extra in a movie telling the story of the general strike in 1919. It was the biggest of its kind and was news worldwide.

As an extra, I played a striker doing a silent march. It had to be silent because the powers that be had made it illegal to protest and demonstrate. So thousands of people took a quiet stroll through the streets.

Tuesday night was the premiere and everyone connected to the film was invited.

They had a red carpet photo op prior to the movie. I did it after the film so it was roped off.

They had a live band.

And lots of decor.

The movie was a musical (not my favorite) but as way to learn more about the event to consolidate info I had already learned, it was pretty good.

But the best part is I saw myself twice in the film! I didn’t hit the cutting room floor! 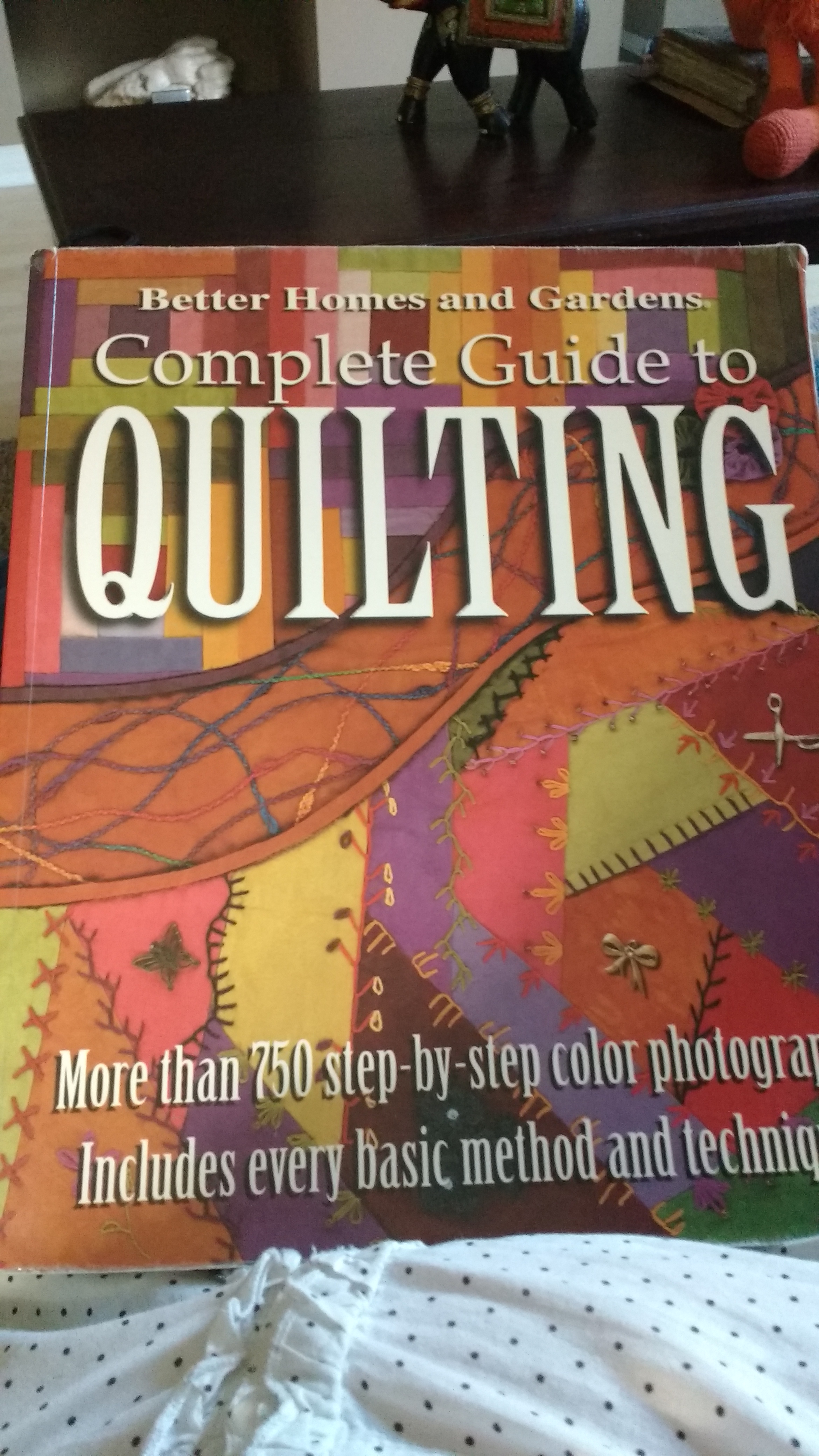 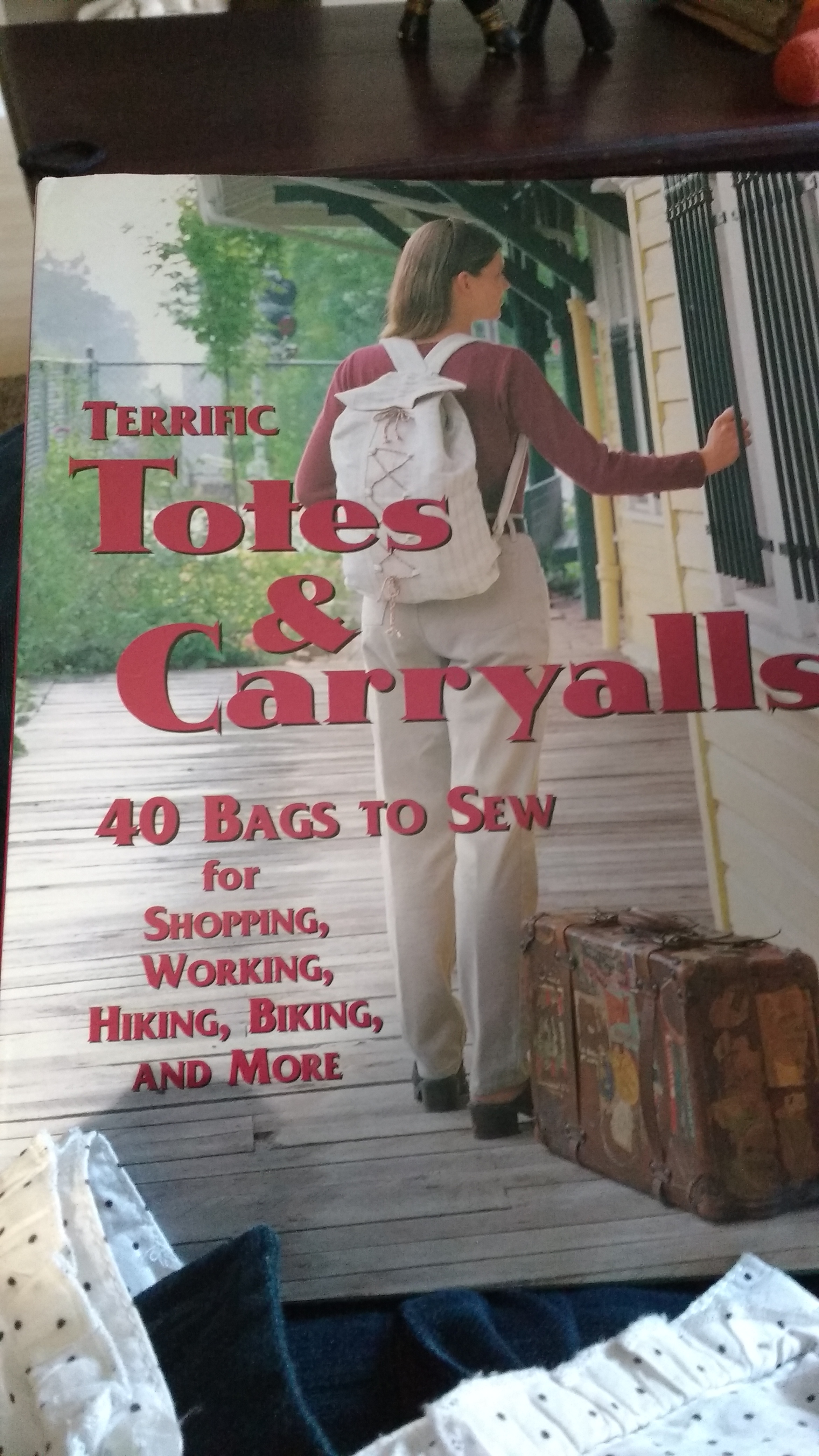 In the Costume Museum of Canada display for the 1919 strike, I imagine the mannequin on the left is wearing the outfit of a shop girl. 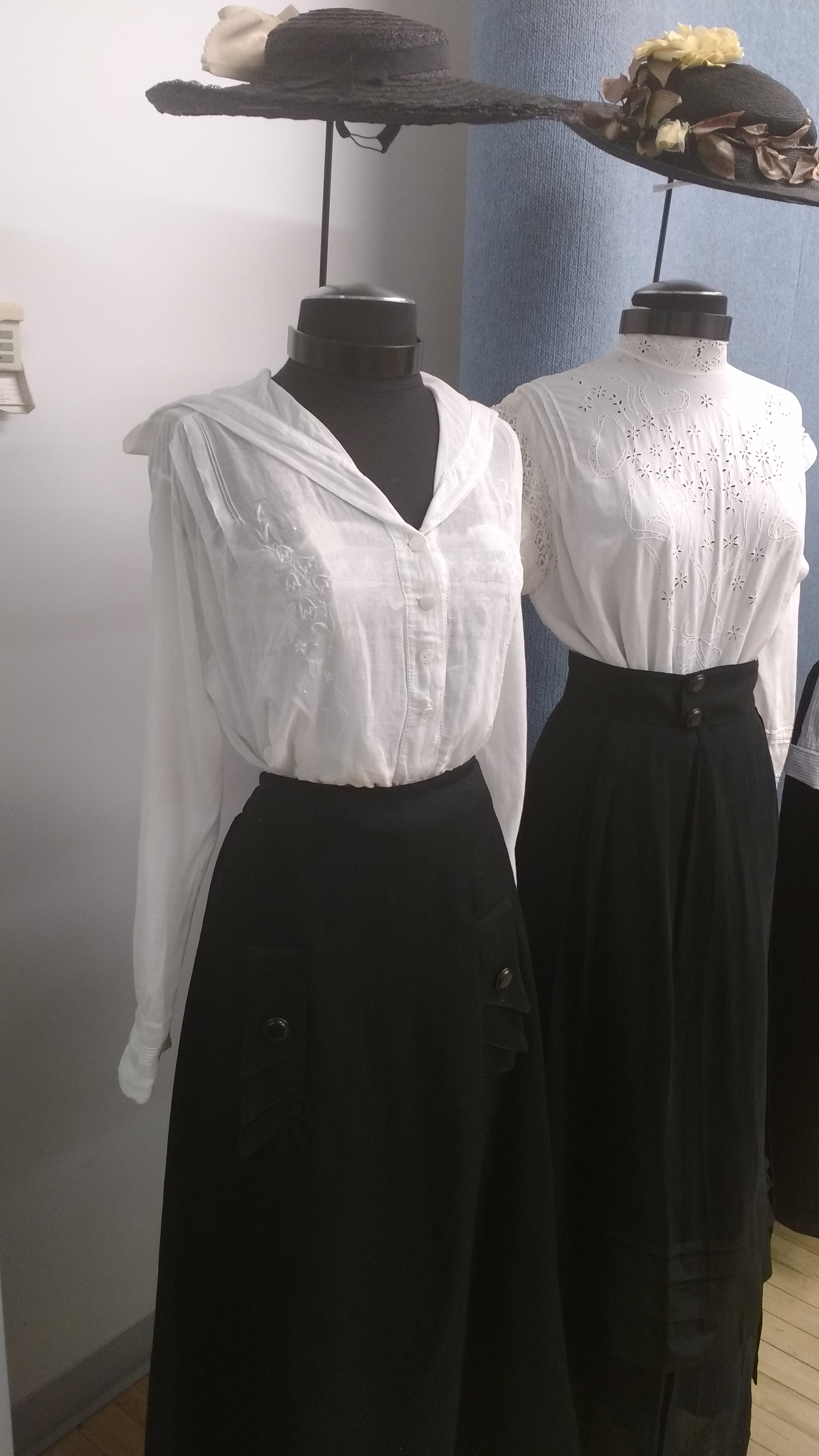 I know it looks like a pair of twins but the details are slightly different. The “shop girl” shirtwaist has this detail…

…small bits of embroidery and pleats. The skirt has a faux pocket. 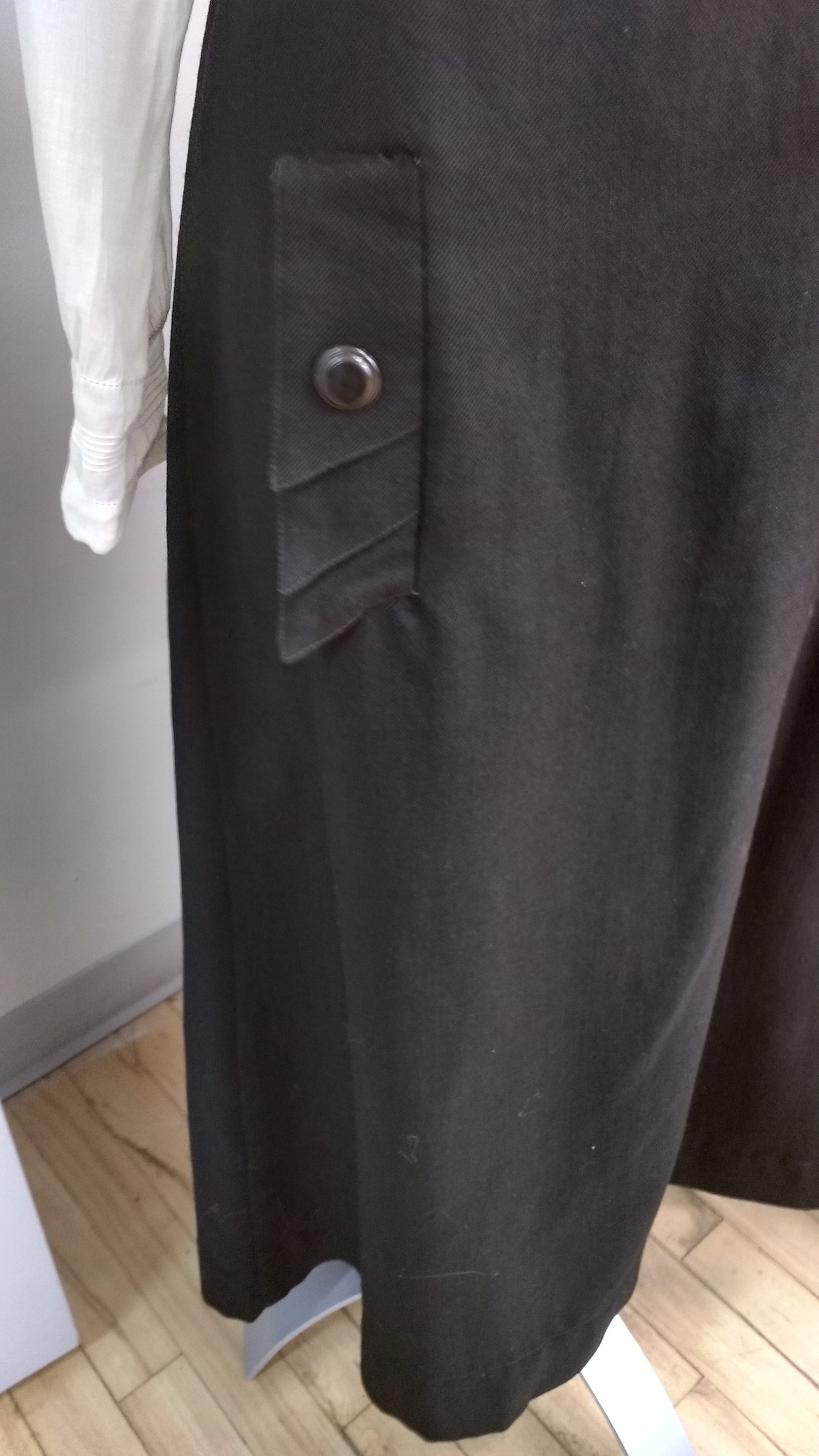 I have finished cleaning out the dresser in my sewing room. I have one empty drawer!

I have the lining cut out for my next project. Next step is making the pipeing. By

Now for the joke. It comes from my brother in law who, like me, has the sense of humor of a 12 year old boy. My sister in law was talking about these awesome glasses she bought at a thrift store.

My brother in law turned it around and said she looks like she is taking a whizz in the trees.

Life stressors continue but nothing like an afternoon out with a chum to brighten the day!  Shirley and I went out for a Stitch and Bitch and gift exchange.  Lottie couldn’t attend so we may have to do it again some time so we can get our gifts to her!  We missed you Lottie!

Since my birthday is coming up, Shirley gave me my gift first.

A beautiful pattern for 1912 outfits (love the purple one!) and a button hook.  Now I need some American Duchess button shoes….

Then we did the Christmas gifts…

Shirley gave me some fun sewing machine fabric…I don’t know yet what I will make but it sure will be fun what ever it is!  She also gave me a house wife’s sewing kit and some cool light up crochet hooks.

I happened to bring a crochet project to the Stitch and Bitch so I tried one of the hooks out.  I really liked it!  I especially liked the shape of it.  My hand didn’t tire out so quick.  I liked the light too and it will be especially useful in my somewhat dark living room.

I gave Shirley an 1890’s catalogue.  It is in very sad shape but the pictures inside are still very clear.  I gave her some Dorset buttons that I made and a few retro cards and post cards.  I also gave her a thimble but somehow managed to chop that out of the photograph.

Neither of us are rolling in cash but I must say, we did a pretty good job of getting some really cool gifts.  So much easier to get gifts for like minded friends!  You’re next Lottie!

The Costume Museum is setting up a display of some its books for the public to flip through.  We have set up the display like a library so folks can sit down and flip through the selected books.  It didn’t take long to create the selection so once done, we sat down to flip through some of the books ourselves.  I found one on crochet that seemed to be from around the turn of the century (though I couldn’t find an actual date on it.)

I found a couple of patterns I’d like to try and this blog seems like a good place to save it.  I often think of my blog as a kind of “cloud” for saving photographs and ideas in the event of a computer crash.

so here goes…a lace with a matching insertion. 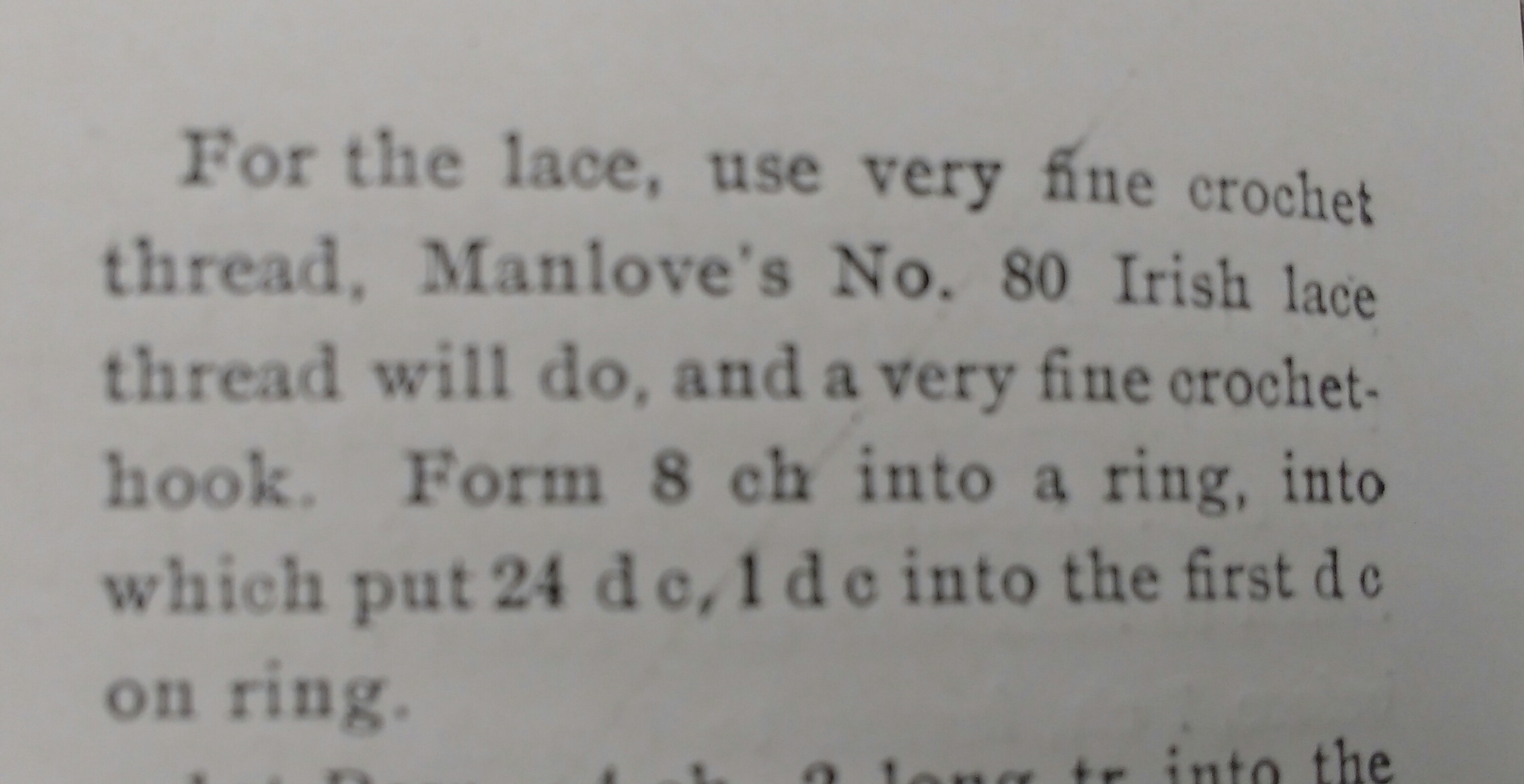 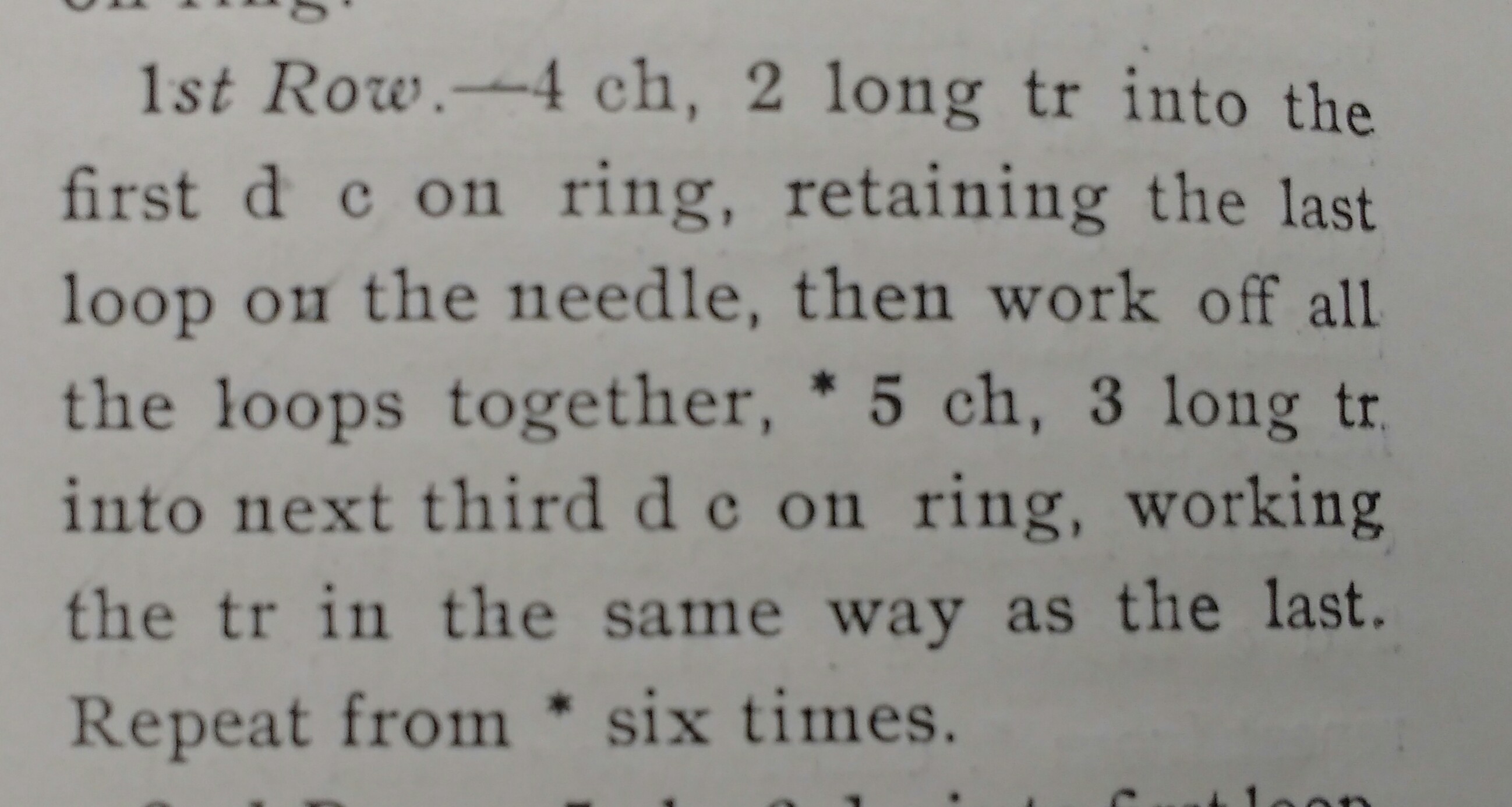 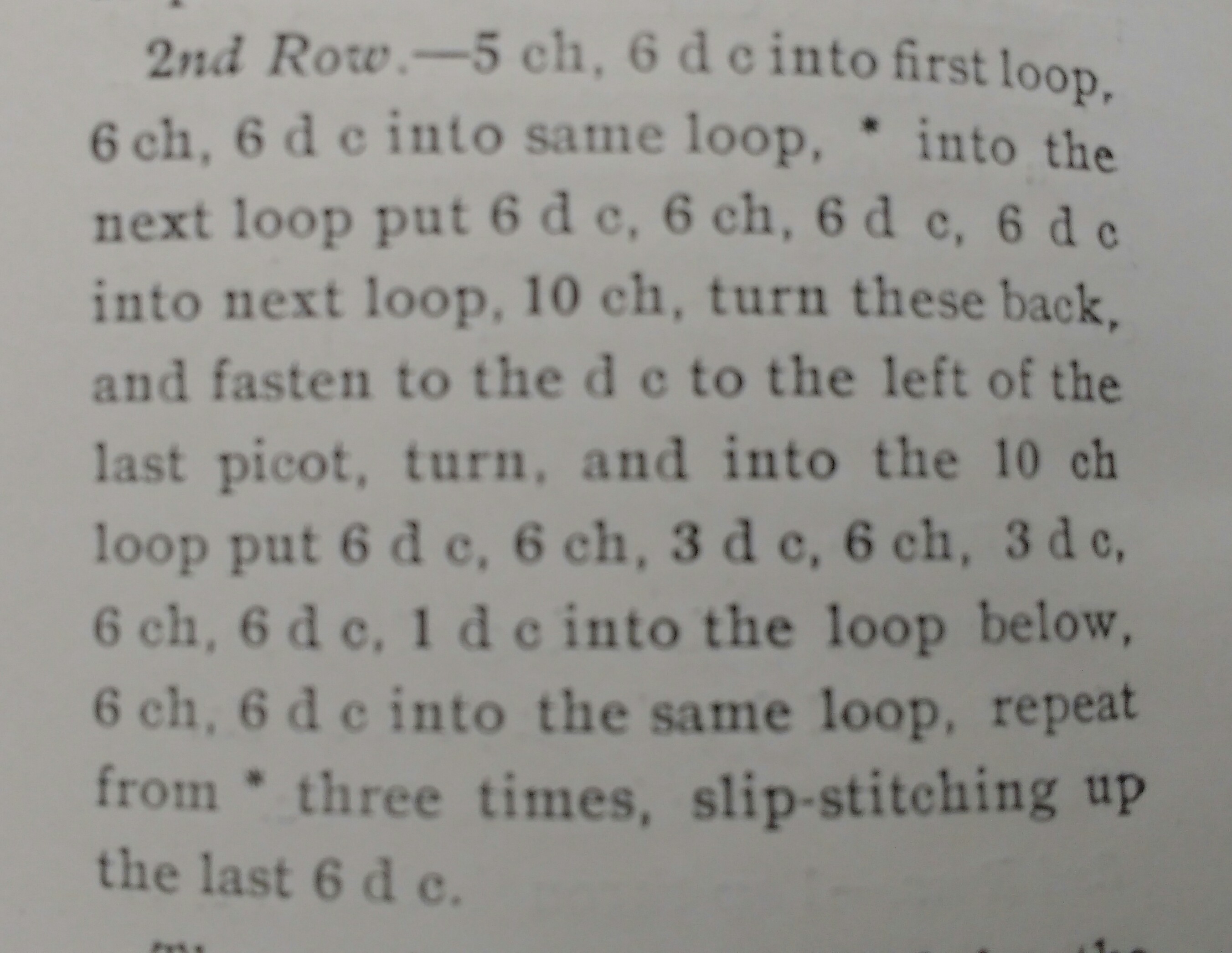 I haven’t tried this yet but I anticipate some struggle to comprehend vague instructions.  Sigh….

As you recall I got a good score last week.

Pictures were part of that score. One was a stereoscope card. The picture is of a group of people frightened by a ghost.

The “ghost” was done with a double exposure.

I also got a carte de visite of a mom with two young children. Someone asked if thought it was a post mortem picture (child on the right) but I don’t think so.

The photo was taken in Northfield MN and judging by her elaborate hair style, it could be from the 1870s.

Neither Lottie nor Shirley have seen Ross house and it had been some time since I had last seen it, so we decided to make that our second stop on our Doors Open outing. 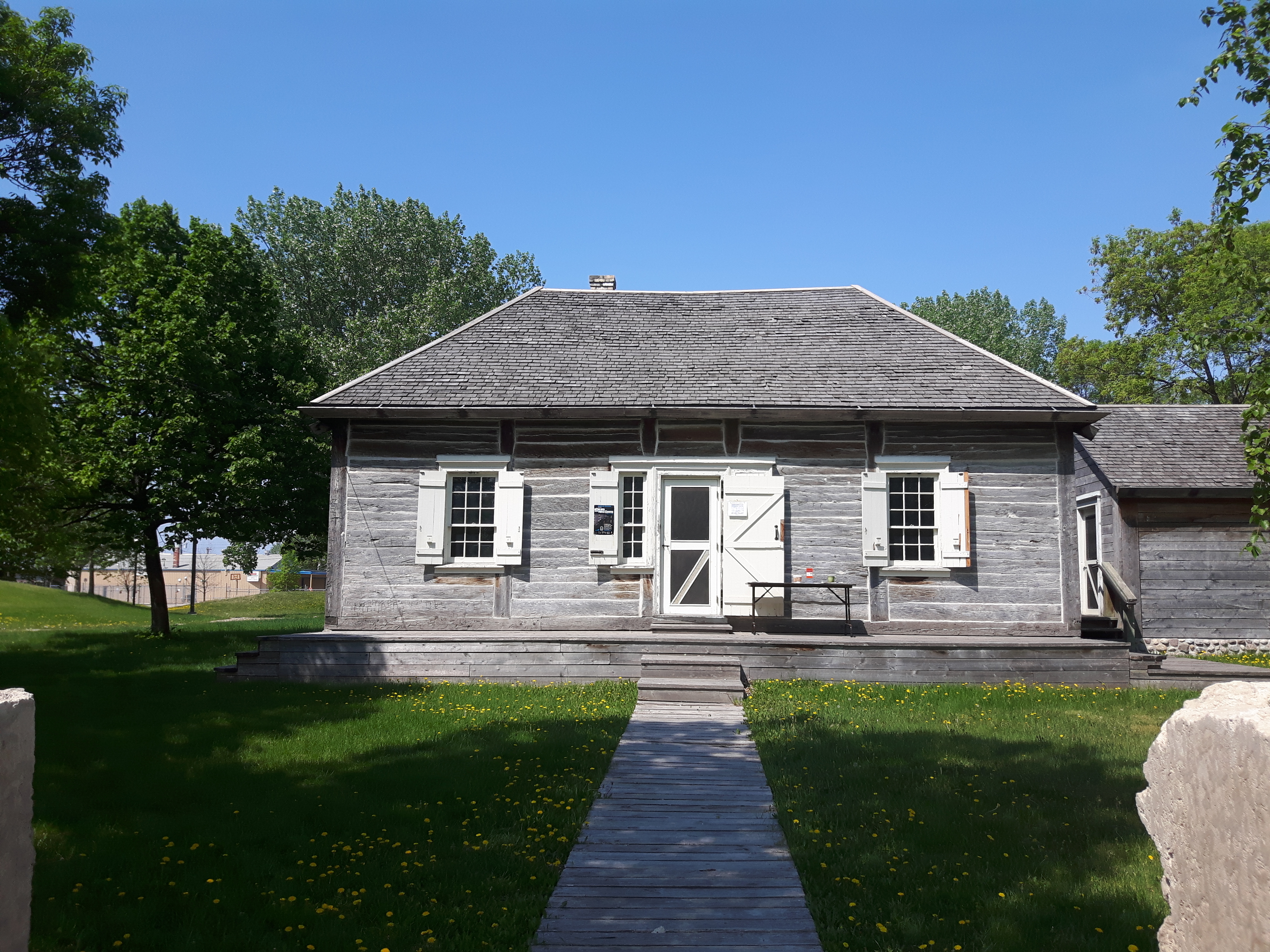 This little house was fairly grand in its day and was the first post office in the area. 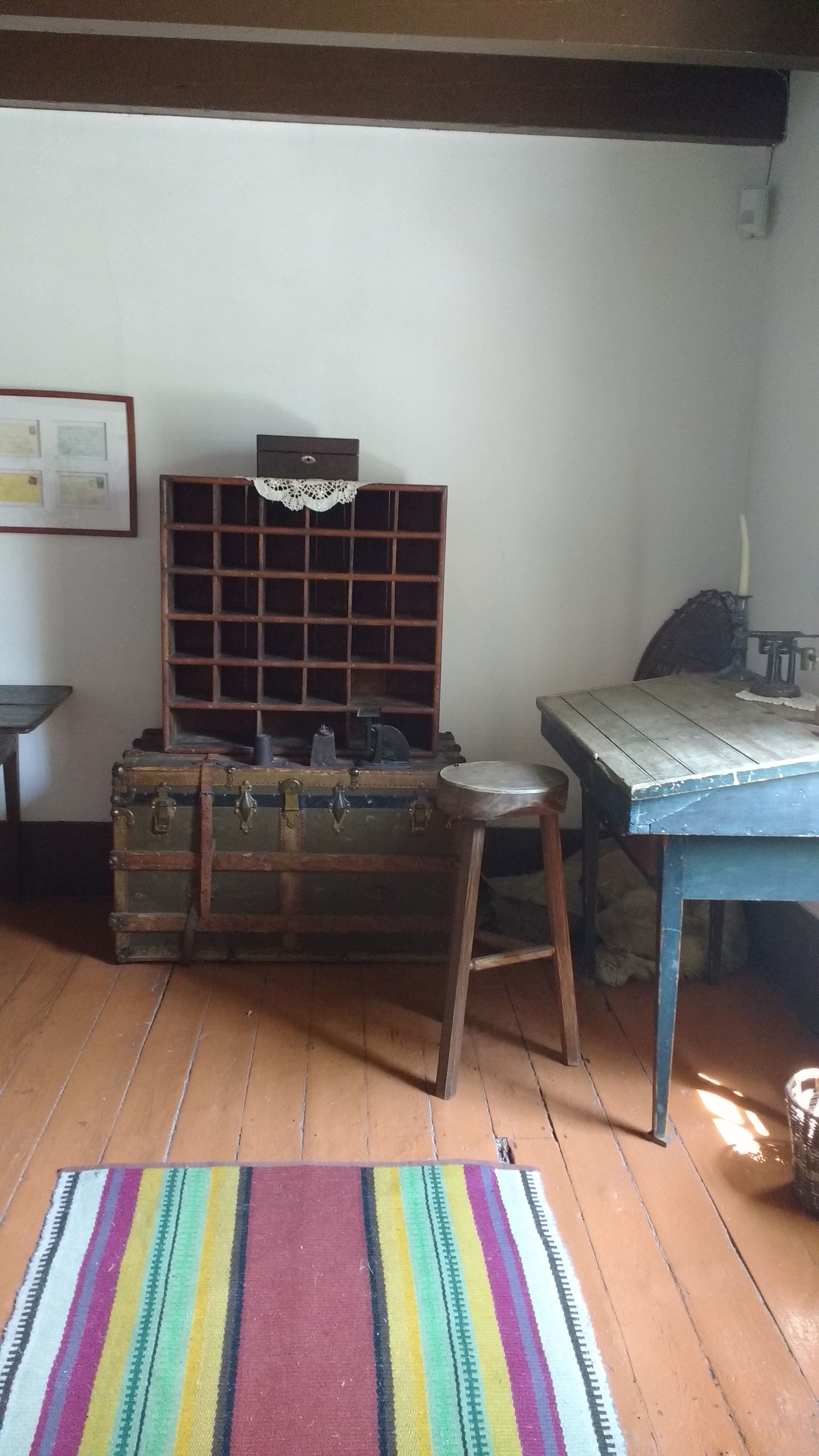 There were a few people from a group that is interested in the early Selkirk Settlers.

Here are some of my favorite things in this little house.

There was a lovely lilac tree in bloom (my all time favorite flower) so I decided to take a picture of Lottie and Shirley and play with my photo app. 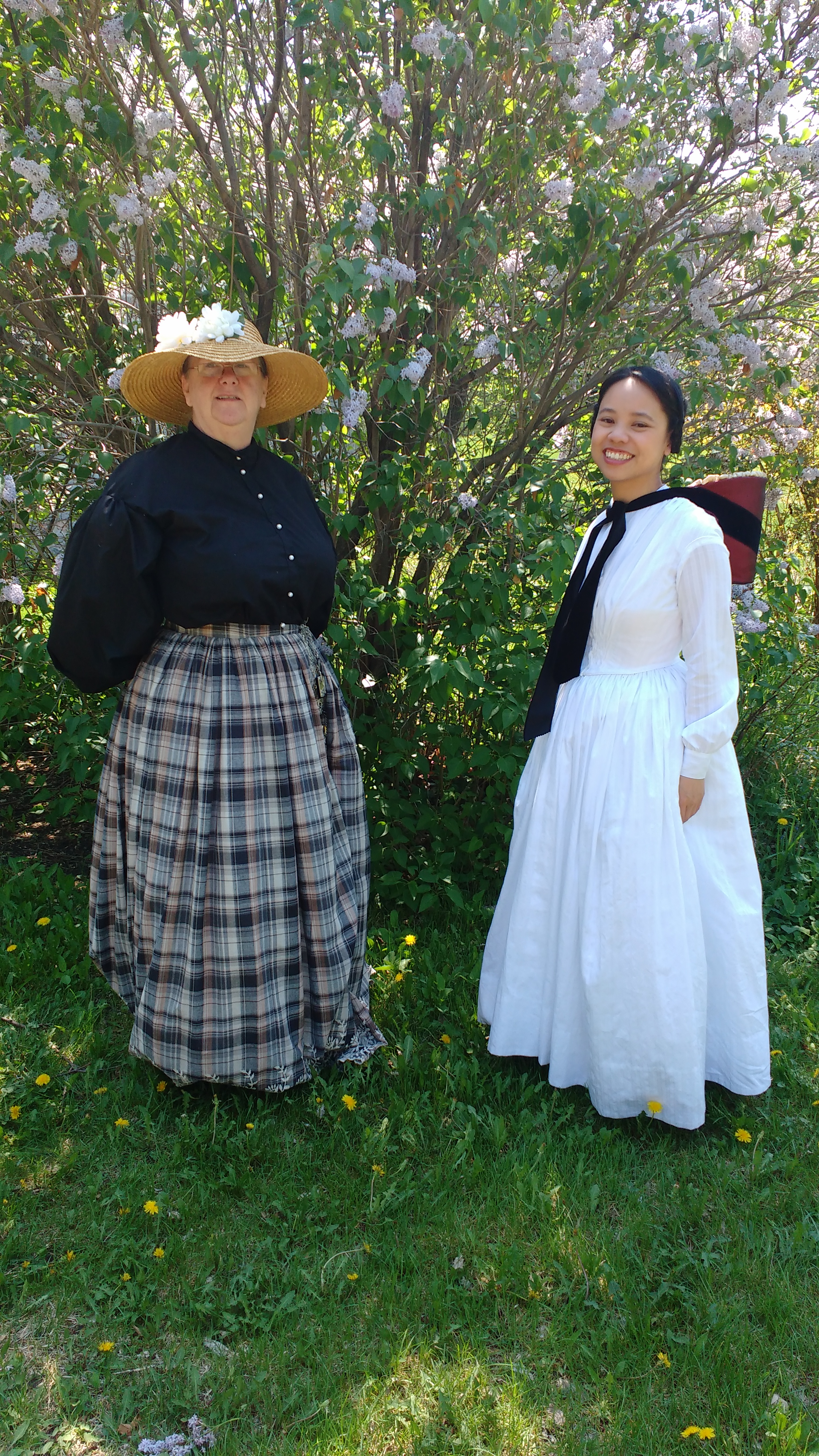 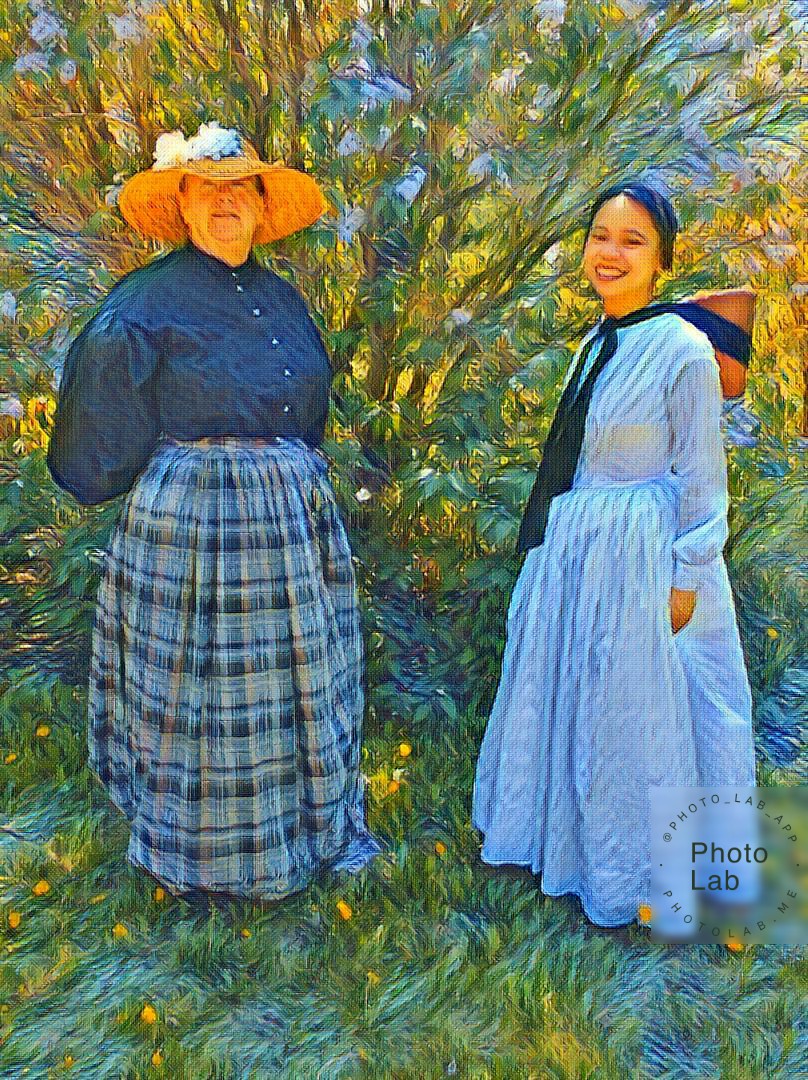 At this point we were hot and hungry.  Our big plans for a picnic on the grounds disintegrated in favor of eating in my air conditioned car!  This proved a good move as it gave us the strength in see one more venue.  7 Oaks House. 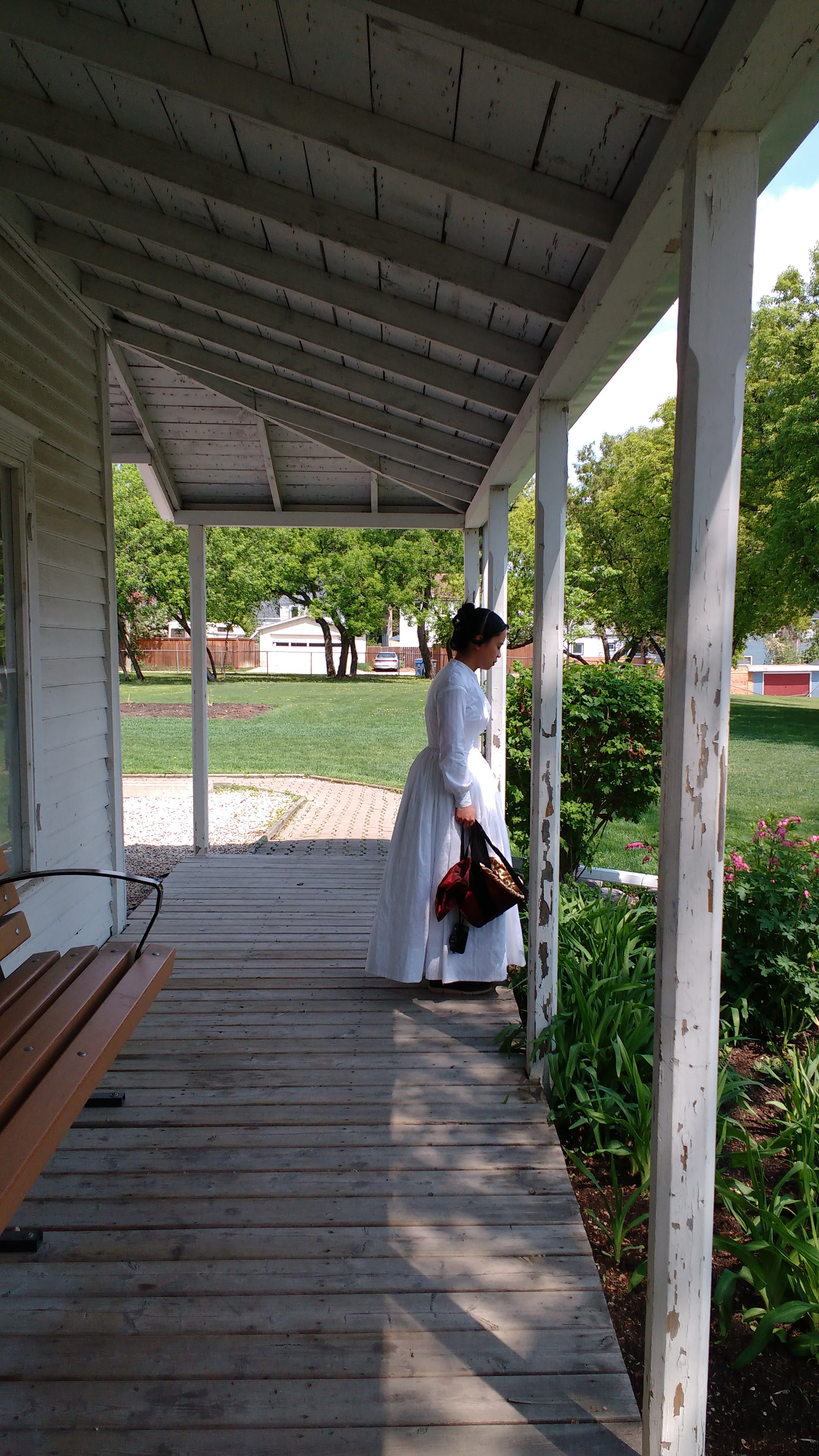 We have been to this house a few times. The little porch is nice.

If only I could draw…(wink wink…)

I liked the door bell.  You pull down on the lever…

…and the bell on the other side rings.

Just inside the door is this holder with this nice parasol/umbrella with the metallic handle.

I had been chatting with a friend on Facebook and we were talking about our favorite dish patterns. We both had to look up photos of each others favorite. When I walked into the room of the house, there was the pattern my friend had mentioned! I hope she gets to the house to see it for herself!

Next post will be about how I spent my Sunday for Doors Open.